It seems a bit remiss of us to go a day without posting any Samsung Galaxy S8 leaks but yesterday that occurred and we apologise unreservedly. All the leaks occurred overnight so here they are, all in one post. We have more pics, we have supposed front displays showing all the available S8 colours, we have screenshots of the launcher and the icons and we have rumours explaining the strange fingerprint sensor placement all while Samsung begin advertising the Galaxy S8 in Korea. Wow. What a trove of leaks to cover.

Firstly we have one of our favourite leakers /Leaks sending out a tweet with the latest grainy pic of the Galaxy S8. The pic does not show anything new but reaffirms that the Galaxy S8 is a good looking phone with a curved display and minimal bezels. (I do wonder why no one has a decent camera on their phone when taking these pictures? Were they taken with a Dopod D810?) 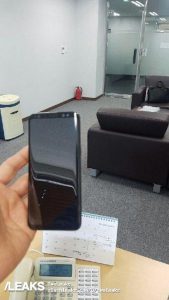 Another tweet from TechDroider showed off what are supposedly the front displays of the Galaxy S8. They may be screen protectors but they look very much like the colours we have seen leak. The colours include black, white, blue, gold, silver and a grey.

In yet another tweet, this one sent out from China and picked up by Android Central shows one of the aforementioned colours, the gold S8. It shows the Samsung dialer on the display as well as very-evident sensors above the display, some of them quite large. The different shapes and sizes really plays havoc with my OCD. With the strange placement of the fingerprint sensor Samsung are hoping the facial recognition sensor on this is fast enough to make people not want to use the fingerprint sensor — otherwise the camera sensor is likely to be getting a heap of fingerprints on it. 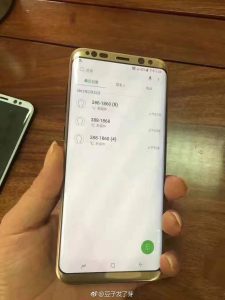 Regarding that fingerprint sensor placement, there are reports out of Korea that Samsung wanted to include the fingerprint sensor under the glass as was rumoured late last year. Unfortunately, despite working closely with Synaptics they were unable to get the technology ready in time for the beginning of production. Rather than bring a product to market that was still unreliable Samsung chose to place the fingerprint sensor on the back, next to the camera. 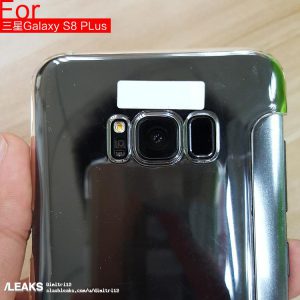 The first “real” screenshots of the software have also appeared overnight, once again from /Leaks. The screenshots show the all new icons from Samsung, all based around the theme that we have already seen for the navigation icons on the navigation bar. Samples of these can be seen below. It is nice to see Samsung changing things up although they do still have the iOS-style background that they have always had.


Last but not least is the reports from Korea that Samsung are beginning their official media campaign. With LG’s 2017 flagship already on sale and by all reports doing very well Samsung have released a 15 second teaser. The ad doesn’t reveal much information other than the date of the 30th March, the number 8 and the shape of the S8 phone/bezels. For Samsung it is most likely a case of getting into the minds of consumers before they go and buy a rival’s phone.

sigh, more screen protector shots.
They should just do us all a favour and show us the phone already.
(Samsung shows off phone in proper photo tweet: “Here’s the phone, now wait till the 29th and we’ll tell you more”)
I love leaks and all, but this is getting ridiculous.