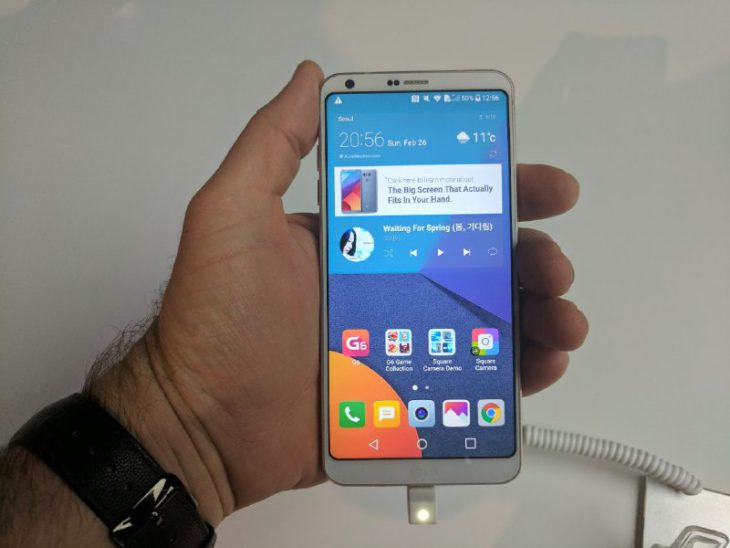 The LG G6 isn’t due to launch in Australia for another ten days or so, but already the pricing for Telstra customers has leaked thanks to @bios_leaks, giving us a good look at what the outright pricing through Telstra and other retailers as well.

From the information we’ve seen, the outright price through Telstra will be $1,008, with plan price starting at $27 on the $55 plan, dropping off to $0 handset repayments on the $135 plan and above. For those taking advantage of Telstra’s Go Mobile Swap (leasing) plans, handset prices start at $17 a month on the $55 plan, $6 on the $75 plan, and free on the $95 plan and above.

Here’s the full pricing tables for the LG G6:

What else can we tell you? At this stage, the LG G6 will not be Telstra Blue Tick certified, meaning that it probably won’t have as good reception as the upcoming Samsung Galaxy S8 in fringe reception areas, given the S6 and S7 were both blue ticked.

However, that probably matters less than the outright price. While the $1,008 is an odd number, it does very strongly hint at a retail price around the $1000 mark, which makes it potentially $100 to $300 cheaper than the Samsung launches have been for the last couple of years. Coming to market sooner, priced more aggressively, and offering a genuine alternative to Samsung’s products this year … it all adds up to LG being in a commanding position.

With this pricing, will you be interested in the LG G6?

No info on whether quad dac will be available here.
One internal storage option…32GB and 2 colours, maybe.
This will be LG’s ‘no frills’ base model.
Question – where to buy the 64GB version in black with the the dac overseas?

Are we getting the 64GB model? And does the Aussie model have the hifi DAC?

According to LG’s website, we’re getting the 32GB model with the Hifi DAC! I’m really excited about that. Wireless charging is a nice but ultimately unnecessary need for me, but the Hifi DAC is going to see a LOT of use. If indeed I decide to go for the G6, that’s going to be something that heavily influences my decision.

it says no wireless charging on the website spec’s so I’d assume we are getting the other version which had the DAC ?

I live in a bit of a black hole area for reception. My wife’s iPhone 6s is fine, my daughter’s cheap Samsung is fine, my LG V20 is terrible, basically useless. We’re all with Telstra. I’m sure the Blue Tick is for better reception in low reception areas. I would get the G6 if it had the Blue Tick but looks like Samsung will get my money next time as I need reception.

Not sure if this is 100% accurate but I was told by a Telstra Corporate Employee that the blue tick is a certification that Telstra charges manufacturers and it is only Samsung who is willing to stump the cash for the certification.

Not entirely true. Yes manufacturers pay for the testing, but a lot of non-samsung handsets are currently blue tick certified, even the iPhone 6s was blue tick.

But the iphone 7 and 7s got it so either the phones aren’t getting the blue tick because of poor reception or manufacturers aren’t paying for the certification?

Only Samsung and two Telstra own brand phones have the tick at the moment?

After the G4 debacle, never buying LG again. 2 handsets both with issues. One about to go in for a third repair within 2yrs

Malcolm B
Reply to  aaricku

Unfortunately that’s been my exact experience with Samsung – no responsibility taken for failures, no communication and no accountability for their level of service. Couldn’t get any worse with LG I’m afraid.

aaricku
Reply to  Malcolm B

You’ll be surprise at how much worst LG can be. And I don’t believe Samsung phones have known defects across all their flagship model that they quietly acknowledge, but does not fix for all affected like LG does.

Malcolm B
Reply to  aaricku

I don’t know about that. Some users are still waiting for refunds for their recalled Note7s. Many users are reporting “pink line” issues with their S6 and S7 Edges and after not even acknowledging the fault and blaming users, Samsung are only now starting to promise assistance to some users, while ignoring others. They’ve also had many others issues over the years for which they’ve taken no responsibility such as prematurely swollen batteries in S4s, S5s and Note 2, 3 and 4s and fires caused by their home appliances which they have again been at best to slow to react… Read more »

aaricku
Reply to  Malcolm B

Fair enough. I can only speak from experience as well. I’ve had 4 Samsung Smartphone, including the note 7 (which was sadly returned and refunded + Bonus 256gb microsd to keep) and have not had much issues besides my very used note 3’s wifi eventually playing up.. I had the LG G4 with bootloop issue AU Stock that is still not resolved for half a year

Been using a G3 daily for the last 2yrs with no issues.

Now we just have to see how limited the colour options are..

The G6 looks like a very compelling buy at around $1000. If I can get an unlocked one at retail for that price, I think I’ll do so.

Malcolm B
Reply to  Malcolm B

I’m assuming no wireless charging in AUS though?

Jamie S
Reply to  Malcolm B

Nope unfortunately. I really like the G6 too and LG have done a great job with the pricing. After shelling out $1250 for an S7 edge it’s nice to see a flagship at around 1K.

How did you find out the variant Australians will be getting?

As far as I am aware, from all reports wireless charging is exclusive to the US only.
Edit: There’s a good article on bgr dot com on 28 Feb about it.

Sorry, I thought South Korea was getting wireless charging as well.

Nope, I think they get the quad dac

Fred
Reply to  Malcolm B

It’s better than the massive overpricing for the ‘flagships’, but with the many lacks, and the ‘last generation’ nature of this, it’s still too expensive.

I’ve a feeling this will be ~$600 on the grey market before very long.

Shakeel Ali
Reply to  Malcolm B

Every phone Telstra sells on a post paid plan is unlocked.

Malcolm B
Reply to  Shakeel Ali

Fair enough but I don’t want one on a Telstra plan. I’d also prefer it not be a carrier model with slow carrier updates.

Thanks for the info Chris. I think though, if I do upgrade my G4 I’ll get a grey version when the price drops. Which will also give me time to see what the reviews are like. Plus, my current Telstra plan I can use my credit on google play, which is a must for an Android phone.