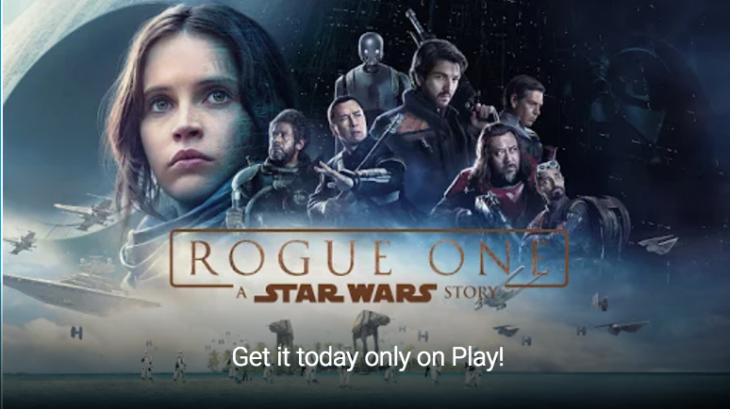 The movie is a standalone movie and sits as a prequel to Episode IV: A New Hope, telling the story of Jyn Urso and her motley crew of rebels who steal the plans for the Empire’s Death Star, plans which are used by Luke, Leia and Han to blow it up in the next movie (Sorry, Spoiler Alert!).It’s a great movie as it stands by itself, with great performances all round, including one from Australian actor Ben Mendelsohn and my personal favourite performance from Alan Tudyk as K2-SO.

It’s a bit of a coup for Google Play customers with both the Apple iTunes store and Dendy Direct showing that their customers are not able to purchase it until March 25th. The movie can be purchased on Google Play Movies & TV for $19.99 in SD (if you’re a monster) or $24.99 in HD resolution – still no UHD option here.

The movie on Google Play includes a bunch of special features in addition to the movie itself which are only available with the movie. It’s one reason I tend to buy Blu-Rays, but with these included with the digital release I’ll definitely be buying this one. If you’re in the mood for some Star Wars today then head over and grab it from Google Play.

Wish I could just rent it, missed in cinemas.