The update follows Instagram stories which were added last year. Just like Instagram stories, Facebook stories will expire after 24 hours, showing up in the top of your followers feeds at the top. The photos and videos shared in Facebook Stories won’t show in your general feed unless you share them there as well.

To create a new story, you simply tap on the “Your Story” icon in the Stories bar at the top of your feed. 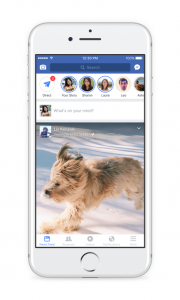 For more fun, Facebook has added ‘dozens of effects like masks, frames and interactive filters’ to the in-app camera including a bunch of movie tie-ins from upcoming movies like Wonder Woman, Guardians of the Galaxy Vol. 2, The Smurfs, Alien: Covenant and more. Lastly, in a new feature called ‘Direct’, Facebook is letting you share photos and video directly to specific people you’re friends with, though just like Stories, they’re only visible for a limited time. According to Facebook, once your friend views the photo or video, they can replay it or write a reply, but once the conversation ends the content disappears. 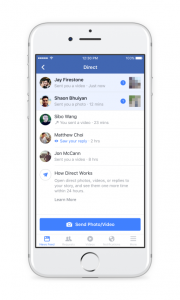 The three new features are a culmination of a lot of testing in Instagram, and apparently Messenger where Stories like features have been showing up as well. The sharing of ephemeral stories seems to be the new hotness in social media apps, and now it’s made it into the largest social network on the planet.

The features will be rolling out to Android and iOS users this week, so keep an eye out for that update notification in Google Play.