Home News and Editorial Marshmallow update for Oppo R9, R9 Plus and F1s now available for... 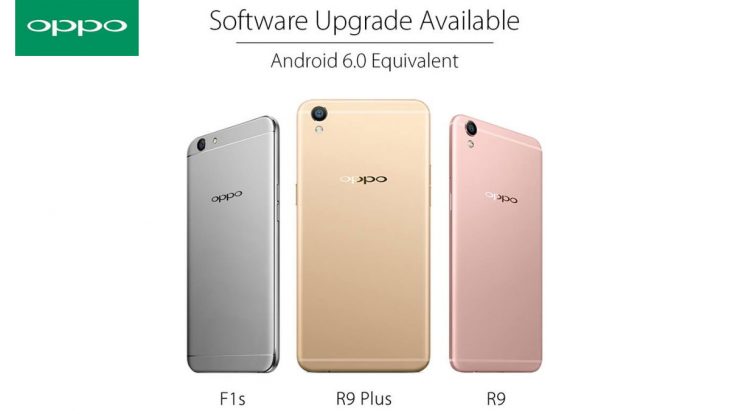 Chinese smartphone maker Oppo has announced their long awaited Marshmallow update for the R9, R9 Plus and F1s is finally available for download.

As announced last month, Oppo has begun making the Marshmallow update available for the three phone models. The update won’t be arriving over the Air, instead interested users will have to download and install the update themselves, but never fear, there’s a step-by-step guide on the Oppo Australia website.

The update to Marshmallow also includes a nice surprise, with Oppo announcing that by simply upgrading to the latest version of ColorOS will allow the OPPO R9 Plus and R9 to have a dual-sim function with 4G+3G compatibility.

Oppo has not announced any plans for the R9, R9 Plus or F1s to get Nougat, however they have announced plans to update the R9 & R9 Plus to a Nougat based version of Color OS in Q3/Q4 this year.

If you’re an Oppo R9, R9 Plus or F1s then head over to the Oppo website and check out the instructions on how to update. Be warned though, the files for the update are rather large, so have a handy Wi-Fi connection available.

All this update seems to have done is upgraded the ColourOS to 3.0 but my Android version is still 5.1.1

Amazing that a company can “upgrade” a phone to a version of Android that is now 2 years old if you go by developer preview dates.

It’s one thing to provide an incremental upgrade for a phone already on 6 – from say 6.0 to 6.1 – at this stage.. but for them to have taken THIS long to update from 5.x is astounding!

Ye, Oppo phones have great specs at a better price than the competition, but their software sucks and you can forget about getting the latest firmware updates. That’s the trade off you make

I prefer to have a phone that gets firmware updates but overall it’s not the end of the world for me. These phones still do everything you need them to do.

yeah – getting something with good dev support is crucial I rekon.

That can be hit and miss for Chinese phones…although OPPO sister company does it well – One Plus – just a pity you cannot really get them here and they don’t support all the LTE bands.

Ditto Nexus 7 2013… it remains my at home tablet for reading and browsing web..

“however they have announced plans to update the R9 & R9 Plus to a Nougat based version of Color OS in Q3/Q4 this year.”

I believe you mean the R9s and R9s Plus 😉