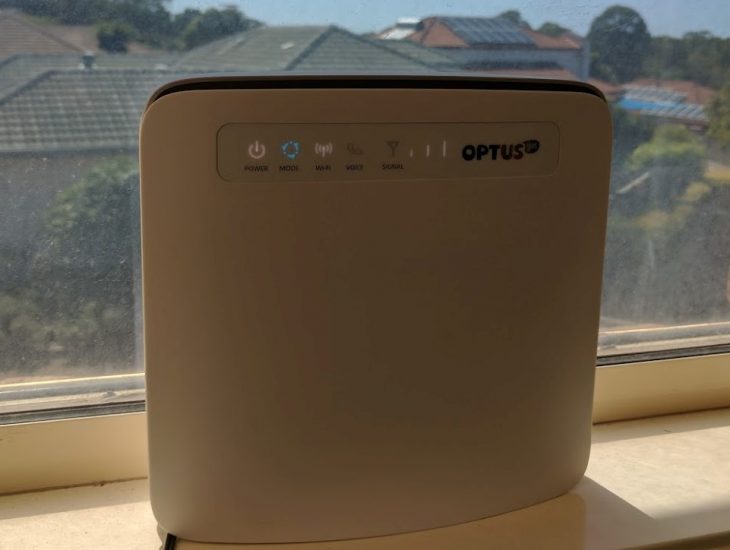 For many Australians, the dream of a decent internet connection is just that: a dream. Despite the National Broadband Network’s (slow, over budget and under quality) roll out, there are still large populations of people who can’t get decent Internet speeds, and many of them are in metropolitan areas as well as regional areas.

Why is this so? Like many things, sadly, the NBN roll-out hasn’t been chosen based on addressing need, as much as it’s been about pork barelling the marginal electorates that the government of the day wants to win over. Anyway, let’s not talk about that.

Besides the (sometimes empty) promises of the NBN, there’s a category of Home Broadband that is moving out of its infancy and into a solid contender, and that’s Wireless (LTE) Home Broadband. I’ve spent the last month replacing my 2.5 Mbps ADSL connection with a crisp fast 15 Mbps connection from Optus.

The Optus Home Wireless Broadband plan provides you with an LTE Router (shown above), with Wi-Fi, Gigabit LAN and a 4 port switch made by Huawei, together with an Optus SIM which provides a 15 Mbps down 1 Mbps up connection.

The plan includes 200 GB of data with automatic 10GB top ups fro $10 up to a total additional bandwidth of 250 GB. After 250GB the speeds will be throttled to an (un)usable 256 kbps. For a 24 month contract, the base plan is $80 per month with the router being provided for free. Month to month plans are also $80 per month, however, the router will cost $240 upfront, and the 12 month plan is $90 with the router repayment of $10 per month included in that price. For anyone with decent Internet delivered over a wired connection, you’ll know that these prices really aren’t great; Chris, for example, has Bigpond Cable delivering his home Internet, and for $99 a month he gets 500GB data each month. NBN plans are known to be significantly more competitive. Wireless Broadband simply isn’t as generous or well priced at the moment, for a number of reasons which we won’t explore here. However, $80 a month for 15mbps Internet is really rather reasonable if its the fastest option you have available.

Unlike most reviews, there’s not a lot for me to actually review. The hardware, made by Huawei, is largely irrelevant once you’ve set it up. Seriously, when was the last time you paid much attention to your WiFi router, or your cable / ADSL modem? The software isn’t much to talk about too, as there really isn’t any. What does matter is speed and reliability — does the Optus Wireless LTE solution offer the advertised speeds, and does it do so without causing problems?

I tested the Optus Wireless LTE modem both as a stand-alone unit (i.e. creating its own WiFi network, and connecting to that directly) and as an Internet gateway for my home network. In each case, I can attest that performance was at or just under 15 Mbps as advertised about 90% of the time. Occasionally, it would be lower, but not often and not for long. I found that if I waited a few minutes and tested again I’d be back up at full speed. During the test period, I downloaded Mass Effect Andromeda, something which would ordinarily have taken me around two days to finish. With Optus’ wireless service, I downloaded it all in about 8 hours, and for me that’s a huge difference.

As for reliability, I honestly never noticed it being down, ever.

There’s one big consideration with the LTE router, though, and that’s positioning. Being effectively a mobile device, it likes to be close to the outdoors. I tried several experiments with positioning the device in my house. When it was in the middle of the lower floor of my house it didn’t quite get to 15 Mbps, when I moved it to a window it did. When I moved the unit upstairs it got the full 15 Mbps pretty much everywhere I tried it except inside a cupboard. This is definitely a device you’re going to want to keep out of a cupboard or use external antennas that screw into the back of the modem.

For those worried about monitoring their data usage, just like with your mobile account Optus provides a suite of tools including alert messages and emails and usage monitor apps. Coming from such a slow ADSL connection, the biggest change in Internet usage I noticed was that because I could now use things like Netflix, I started to use them, and thus my Internet usage went up.

Overall, the Optus Home Wireless Broadband plan is offering you a pipe from the internet to your home, a simple LTE-based internet pipe, and that pipe works, and works well. As a long time sufferer of slow internet, I have now begun the process of negotiation with the minister of finance to migrate from our slow and crappy ADSL to a fast and reliable home LTE solution. Yes, I want to get one of these services, and I’d recommend them to you, too.

The one thing I wish the plans offered was an unlimited option. Yes, that would be more expensive, however for me, 200 GB would probably be just too limiting, and the fall back speeds are so horrifically slow that it would render the Internet all but unusable. Would I recommend the Optus Home Wireless Broadband plan? Yes, if you can’t get a decent fixed internet plan, or your speeds are as bad as mine, and the NBN is a distant dream/ nightmare for you then this is an option you need to seriously consider.

The only warning I’d give you is know your usage. I think it’s likely that your overall usage would increase once you had access to acceptable Internet speeds and you’ll need to factor that into the affordability calculations. You can check out the plans on the Optus website.

There’s an app that allows you to lock the router onto 4g bands only (12mbps) – the whirlpool wiki has a page dedicated to the service. An Ovo sim will work and give you max 4g speeds, but compared to the optus data allowance isn’t much of a value proposition.

I also moved to wireless due to a very slow adsl speed being around 5km from the nearest exchange and nbn a long while away… however instead of optus I decided to go with vividwireless. The cost is only $9 more and the speed is 2mbps slower than optus but you get unlimited downloads so you don’t need to constantly check your usage. I’ve had a pretty stable connection most of the time and the speed also quite constant. I am pretty close to a tower though so you may want to check oztowers.

We’ve had this product for 2 months and invested in a rooftop aerial set up as our nearest tower didn’t support 2300mhz, but the next nearest did. Worth searching on oztowers and checking elevations on Elvis before jumping in.

I’m very interested in this product. NBN isn’t even mentioned as being close to roll out in my area, I don’t want cable for aesthetic reasons (can only be placed overhead where it will be glaringly obvious and ugly). Just did a speed test – 0.71 MB/s download, 0.4 MB/s upload. Time to look into this.

Hmm i posted a reply to this article on Facebook, but throw it in here as well. Ive been using it for several months and love it compared to the lowly 2 or 3mb max i was getting out of ADSL. But now that we’ve got a decent connection 200gb isnt enough for my family of 5. And thats without streaming TV which Id love to start. But hey its better than what we had at least we could stream TV if we had the bandwidth. Another positive is this can be taken with you and used where you like.… Read more »

I can get cable/nbn through other providers but optus says its unavailable? Do not use optus for anything they are fucking useless!

Yes that’s right, been using it for 1st month and the speeds are 12/1 down/upload speeds. Don’t know why upload speeds are low even on LTE? Seeing only in Australia.

Upload speeds are low because they are using 2300MHz Spectrum, which is TDD, which is different to all other LTE which is FDD, and I’m not getting into technology, but there is reduced uplink with TDD, something like 30Mb/s(FDD) compared to 10Mb/s(TDD). With Optus having 98Mhz of 2300Mhz spectrum, in capitals, they can run 4x 20Mhz channels, where the FDD is very limited(Currently 10Mhz of 700Mhz, 15Mhz of 1800Mhz spectrum and 20Mhz of 2600Mhz Spectrum). TDD also uses more power, and is preferable to use for fixed broadband compared to use in phones(because batteries), this is the same spectrum NBN… Read more »

Thank you Darkam, that was very detailed explanation.