Google Wi-Fi is one of many mesh networking products being launched this year, it’s limited in availability, but Google has big plans for it, including making a new model if a new filing from the FCC is to be believed.

The device has arrived in the FCC, and a look at the base of the device shows that it’s similar in specs to the device announced last September, and released late last year. The new router – model AC-1304 – is again a mesh networking router, with dual band (2.4GHz/5GHz) support.

The device appears to be a more baseline version of the existing Google Wi-Fi product with Android Police noting that it doesn’t actually have support for ZigBee protocols associated with Internet of Things (IoT), or home automation control. The FCC label diagram does show that the physical setup of the device in terms of ports appear to be the same as the original with dual ethernet ports and a power connection. 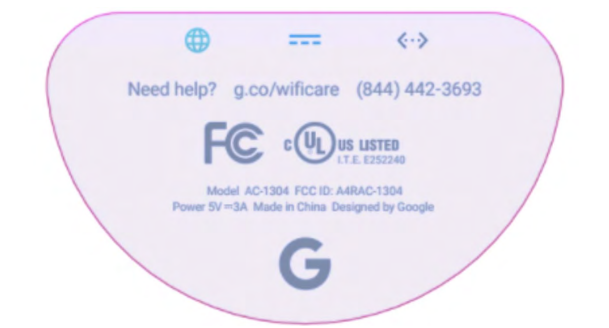 The device is under wraps for now, with the internal, external & test setup photos, as well as product manual being kept confidential.

Latest rumours say Google is working on a combined Google Wi-Fi/Home device, so where this would fit in the scheme of devices isn’t clear. We may never know, but there’s some work going on with Google Wi-Fi, now we just need it released in Australia.

Do you think they could just work on bringing their products outside the US? That’d be greeeeat.

Well if it’s going through the FCC it’s a bit more than ‘working on it’. More like launching it within a month if previous history is anything to go by. Or maybe Google I/O on 18th May?

And looking through the docs, it looks like the device isn’t actually cylindrical this time, in contrast to the previous model. It’s more ‘squashed’ it seems.

Personally I wouldn’t be too surprised if this were to be an ‘Echo Dot’ type device with a mesh router built in – they need a competitor to that more than they need another mesh device.

Maybe google’s Thread/ZigBee radio will be added to a new Google Home,
this would possible allow google home to control stuff without needing to use wifi.
Good when the internet or route has issues.