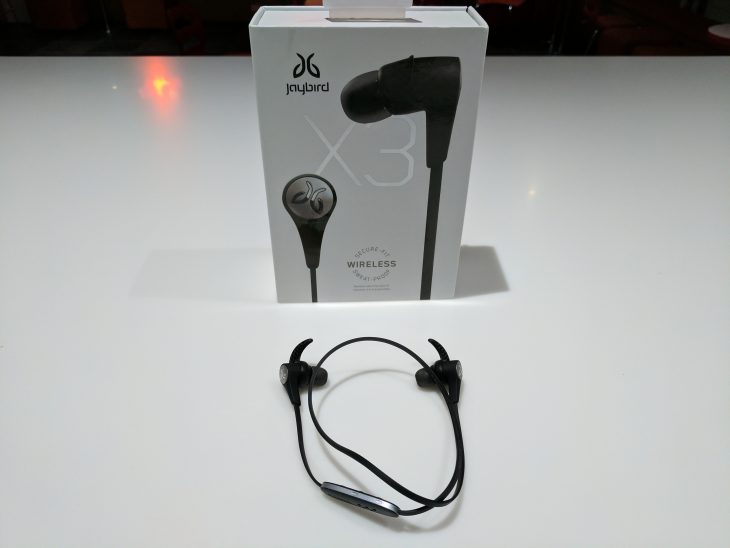 The hunt for a replacement pair of bluetooth earphones continues for me. This time around with the Jaybird X3 earphones which rolled into Australian stores in late February for $199.

The Jaybird X3 is a slight improvement on the Jaybird X2 earphones which I grabbed a year or two back but found to be lacking in terms of battery life and connectivity. The Jaybird X3 promise a better connection in terms of power using Bluetooth 4.1 vs the Bluetooth 2.1 on the X2, and their form factor is slightly smaller meaning they don’t stick out of your ears so much.

There are some downsides, including the switch to a proprietary pogo charging solution on the X3, whereas the X2 used a convenient microUSB connector. Being slightly smaller, the battery life is also decreased, but we’re talking going from 8 hours on the X2 (I only ever got around 5) to 7 hours on the X3 (we’ll get to my real world impressions later).

The buds are pretty well priced for in-ear Bluetooth earphones, so the big question is: Should you buy them?

There’s a fair bit in the box actually, you obviously get your Jaybird X3 wireless earphones and the charging dock/connector, an instruction manual + warranty books, but then in a more fun vein you also get a Jaybird decal to stick wherever takes your fancy.

Also included in the box are both foam and rubber ear tips and a selection of fins for keeping the Jaybirds in your ears – you get 3 sizes (small, medium and large) of each to really dial in the perfect fit. You also get a clip to attach the Jaybirds to your shirt and a pair of cable clips to shorten the cord to keep it off your neck, and a convenient bag to keep everything stored in.

The inclusion of so many eartips and fins show Jaybirds dedication to making sure you get the right fit for your ears. A little playing around and I had the most comfortable fit for me. I like the design of the Jaybird X3, they’re small and fit comfortably in your ear. They also don’t stick out of your ears when you’re looking at people.

The earphones, once setup, do fit quite snugly in your ear once you dial your tips and fins in, so you can’t really hear when people are talking to you – a plus or a minus that, I’ll let you decide. There is the downside that you can’t really hear traffic if you’re running outside, but if you stick to trails and footpaths, you’re usually fine.

I had great success with the Jaybirds, they’re comfortable to wear even while running and stick in very securely. There’s a number of setup instructions which show you can wear them hanging down, or as over-ear ‘sport fit’ if you want something a bit more secure. I found both setups to be good for going for a run. 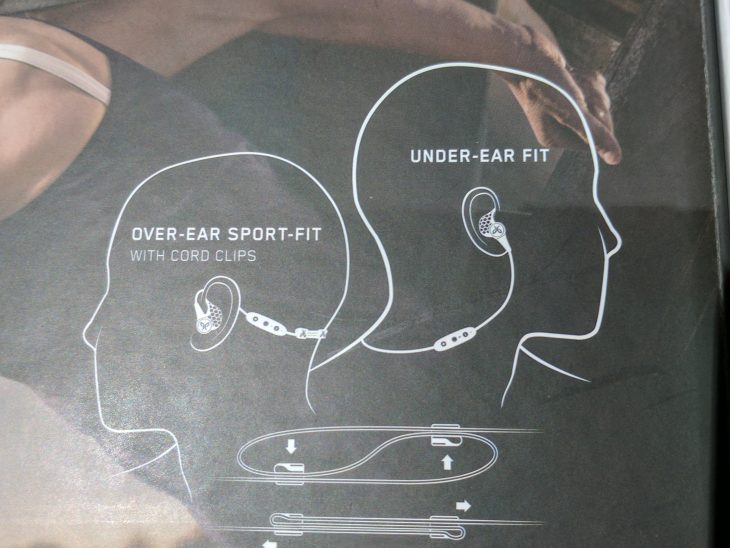 Now you’re not going to be going for a swim in the Jaybird X3 earphones, but they are water resistant so you don’t have to worry about sweating in them.

The Jaybird X3 have a nice inline control with Volume up/down buttons and a power button in the middle. It’s also got a microphone in the inline controller so you can take calls on the go. The buttons could be a little better marked to differentiate them while blindly reaching for them, but they’re pretty straight forward and easy to learn which does what. I reviewed the Jaybird X3 in stylish black, but you can also grab them in white. Overseas a red and khaki colour option is available which would be sort of fun to try out, but the black is ok, and far better than the white which if they’re like the X2 will show any sweat stain or finger marks you get – Note: don’t play with an engine then touch them.

I’ve noted the noise isolation once you have the Jaybirds fitted and it’s wonderfully immersive if that’s what you’re after. The sound quality is very, very good. There’s 5-10mW output on the earphones so you can get some quite loud sound out of these tiny little earphones, and the clarity is surprisingly good. There’s not a huge amount of bass in these, but the range is fairly good on all other fronts.

Range wise, the X3’s are pretty good. I`m notorious for leaving my phone in a room and wandering around the house doing chores while listening to a podcast. There weren’t any drops in sound quality which was promising, I also found that there was a steady connection for the most part until it finally just dropped out completely once I went far enough — about 40 meters away with a couple of walls in between.

The inline controller mic is fantastic. It’s an omni-directional mic and picks up sound really well. I took calls while on a bike ride, while running, in the car and the caller could hear me really well.

One of the great things about the Jaybird X2, and indeed most bluetooth earphones is that they generally use microUSB cables for charging. Unfortunately with the Jaybird X3, they’ve gone for a pogo plug style proprietary charger.

The charger itself is decent, you clip the Jaybirds inline control into the charger with guides either side that ensure it snaps in very securely. It’s a bit awkward, but the main complaint here is that you now have to carry an additional cable. The charger actually unplugs from a microUSB tip so you can use that for other things, but it’s quite a short cable so its utility is minimal. The specs list 2.5 hours to full charge but I found it to be a little quicker, going from flat to full in a little over 2 hours. That was charging from a USB 2.0 port from a Macbook.

Usage time, again the specs list 8 hours, but I found a little under that, with an on/off usage to be around 6.5 hours. There were a number of calls taken on that, so that probably brings the usage time up a little. The Jaybirds also hold charge for a goodly amount of time. I left them charged, but unused for almost a week and when I came back they were still charged up and ready to go.

If you want to just connect the Jaybird X3s to a phone, tablet etc. you can just pair them as a Bluetooth device, but if you want a more refined experience you can install the Jaybird MySound app, available free on Google Play or the Apple app store.

The Jaybird MySound app is compatible with the Jaybird Freedom and X3 headphones, but unfortunately no other models. The app lets you ‘create and customize your own EQ presets’ or simply use the presets in the app which have been created by Jaybird. You can upload your own preset creations to the community, and download presets from other users if you choose – just create an account and you’re off and racing.

The app also doubles as a more in-depth manual for the earphones. You can get info on the basics, or even get tips on getting a better fit from the rubber/silicon tips or fins.

You can also find out about a few neat features like the Multi-point sharing that lets pair the Jaybirds to two devices at the same time. Once paired you can listen to a movie on your laptop and answer a call on your mobile phone when it comes in without having to switch. 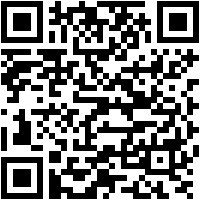 As far as comfort, fit, sound and even price, the Jaybirds tick all the boxes – at least for me. They’re quite the package.

The only drawback for the Jaybirds are the fin design which secure them to your ear, some people just don’t like them. I’m Ok with it, and they’re designed so you can use them hanging down or draped over your ears if you find that a bit more secure.

I love the sound of the Jaybirds, it’s almost up to scratch with some of the higher end headphones I’ve reviewed. It’s not perfect, but it is fit for purpose when you’re working out.

There is a lack of noise-cancelling, but earbuds with active noise cancelling will run you up a fair amount more. The noise isolation of the Jaybird X3s is definitely a good mid-point between full on noise-cancelling and well, nothing.

If you want to grab yourself a set of Jaybird X3 earphones, you can pick up a pair from JB Hi-Fi for $199 – or if you shop around a bit cheaper online.

Ausdroid kept the review device after consultation with the brand, as headphones can't be re-used due to hygiene reasons

I’m late to this party, but got a pair two days ago and am loving them. Great noise isolation, great sound quality, great battery. Yes charging is quirky but not too difficult. I’m still tweaking the fit for optimum non-slippage (given fins don’t really work with my ears), but I’m feeling like $200 that’s contribution to happiness.

I was considering these but ended up buying the Bose SoundSport Wireless earphones instead. In the end it was the sound quality that got me over the line. The X3’s aren’t bad but the Bose are better in this department. In every other department though, particularly battery life, I’d say the X3’s are better.

My X3 signal light is not in function even connected and in charging.

I try to approach Jaybird CS to get help for repair / replacement since mid of Apr, 2017. Unfortunately, Jaybird with super terrible CS services, I have mailed them again again again and again and haven’t get a positive respond and resolution.

Jaybird CS service is nothing for us

I grabbed these instead of the Beats X after lots of back and forth and absolutely do not regret going for these – with comply tips and the fins, these are just fantastic. Perfect for working out and no issue with comfort, though excess sweat eventually leads to the fins slipping a little inside your ear, but only really an issue on the hottest of days.

Great review. You need to get your hands on the Here One headphones. Just received mine and they revolutionise earbuds – nothing like them.

Might have to track down their Australian PR arm if they have them.

I have had the X2 for 1.5yrs. I got it for $200.
It’s the most trouble-free bluetooth earphones I’ve ever had.
It connects to my phone smoothly and quickly all the time (unlike my other ones).

Hmm, could be the ones I have. They drop connection faster than any other bluetooth headset I’ve used so far. Luckily it seems the X3 fixes that issue