After pushing out the Android 7.1.2 update for their devices earlier this month, Google has begun updating Beta users to a stable version via Over The Air update.

The update brings Pixel and Pixel XL owners from Public Beta Build 2 (NPG47I) to the stable build of N2G47E. The update is quite small, weighing in at just 34.1MB. 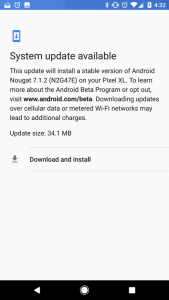 As for what’s in the Android 7.1.2 update, Google addressed that in an update after the rollout began, saying it contained:


This update contains a number of bug fixes, added features, and general performance/stability improvements.
A few changes and updates that we want to highlight are listed below:

Some of the other fixes are with the early shutdown issue, a fix for the small number of users experiencing pink banding on the camera, and a fix to the audio popping issue some users were experiencing at high volumes.

If you haven’t been prompted for the update as yet and you’re on the Public Beta build, go to Settings > About Phone > System Updates and see if it’s ready for your device.

My Pixel C got the stable build last week (it was also on NPG47I).