Over the time here at Ausdroid we have been lucky enough to review a large number of Bose products, so much so that we have been asked if we receive sponsorship from Bose (we wish). More often than not their headphones have received glowing reviews and recommendations — because they are that good. One feature we often give the two thumbs up to is their Bose Connect app. We may have to rethink that for future reviews given the new lawsuit they are facing regarding the data collection and use of it by the Bose Connect app.

A complaint filed by Kyle Zak in federal court in the US is seeking an injunction to stop the way Bose distributes the information it collects from customers via the Bose Connect app. The lawsuit filed suggests that Bose Corp uses the Bose Connect app to track what the user listens to and then on-sells that information without the user’s permission.

The plaintiff, Kyle Zak, found that Bose sent all available media information from the user’s smartphone (yes iOS AND Android) to third parties. Some of these third parties state that they promise to “capture customer data from every customer touch point”. The complaint states that knowledge of a users audio choices gives “an incredible amount of insight” into the user’s views on everything from politics, religion and behaviour. 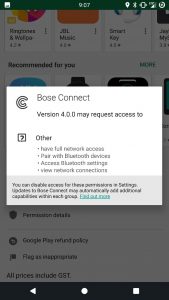 Zak is hardly being entirely altruistic in asking for millions of dollars in damages for buyers of Bose headphones but considering the possible complications with data privacy in this day and age his lawsuit should not be dismissed as frivolous. He is also seeking a halt to the collection of user data which he says violates the US Wiretap Act and state laws against eavesdropping and consumer fraud.

From an Australian stand point it is difficult to know where we stand as we tend to have less consumer protection than US citizens do. We have reached out to Bose for comment on the lawsuit, their data collection and its use. In the meantime if you are at all concerned regarding the collection and use of your personal data we recommend you either turn off those permissions in the app or system settings, or stop using the app entirely.

Does this concern you? Is it a case of yet another company abusing our privacy or is it much ado about nothing?

**Update** Bose have since denied all of these claims and have issues us with a comment. Read about it here.

I suppose the FBI, CIA, etc. could get in on that 3rd party information.

Oh noes, the NSA will find out I secretly have a John Farnham song on my playlist…

Actually, ASIO will only break down your door if you listened to ABBA ( just quietly though; I love ABBA)