Last year I reviewed the Moto Z and considered it to have the best software on any Android device, possibly even better than the Pixel. The overall experience, from an Android purist’s perspective was near flawless. Lenovo have not touched the Moto skin since they took over the company but that seems set to change based on a Weibo post by Lenovo VP Chen Yu.

Using his Weibo microblogging account Chen Yu sent out an update stating that, at least domestically (in China that is), the new Moto phones will use the latest version of ZUI. This of course most likely includes the Moto Z series phones that we all love. Lenovo consider the change improving the “system experience” although it seems their thoughts differ to that of most people outside of Asia. 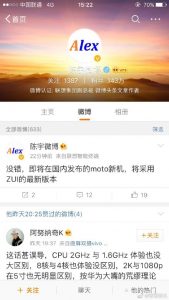 While at this stage it is pure speculation whether this UI change will make it to the Moto units destined for the Western markets, we can certainly hope not. The amazing speed and functionality the minimal Moto skin on ALL their phones allows for a decent user experience, no matter the specs of the phone. Adding a layer such as ZUI to the top of this can only have detrimental effects.

Previously Moto phones sold in China have had a different skin on them to those sold here (just not ZUI) so there is a precedent for Lenovo including different skins for different markets, depending on market’s tastes and expectations. At this stage the Weibo post has disappeared although there are screenshots of it but there is no official confirmation so let’s be optimistic and put this in the not-going-to-affect-us basket.

Do you own a Moto device? Would you like to have the ZUI skin installed over the top of it? Would having ZUI installed affect your likelihood of a future Moto purchase?

Well that would be a shame :/. I would likely move on from Motorola at that point.

Yes, putting a skin on top would affect my decision, as in, I wouldn’t buy one, period.

It’d be a mistake to do this for western markets, and they would see it in their sales figures.

They’d better not do this. I just upgraded from an X to a Z because it’s still practically “vanilla” Android

They would be mad to do it here and if they did they would not sell many I would think other than maybe local Asian customers?

Step one install Action Launcher (or Nova or Apex etc). Step two make it the default home. But, yes, it would be better if the phones are not “improved”. I have helped friends with low end Moto phones recently and they are definitely a smooth experience. The new Moto G5 Plus could be my next phone as there are no more Nexus phones and the Pixel is just ridiculously priced.

@gregory what is the benefit of the new g5 plus over last year’s Moto z Play? The Play has USB C, NFC and a huge battery.

There is little difference now. I cannot see how the G5 Plus and the Z2 Play can exist side by side. The G5 Plus has NFC and the Play supports MotoMods. The Z2 Play will probably cost more. Take your pick. My Nexus 5X has another year left in it so I will not be rushing.

Yeah, I have Action Launcher in my Nextbit Robin to get around their dumb home screen.
But… why make me do that?

A clean stockish homescreen is part of what I find appealing about Moto.
Simple but good hardware and software.