Home Mobiles Got your new Galaxy S8? Here’s some accessories you should consider If you’ve found yourself with a new Samsung Galaxy S8, you’ve got one of the phones of 2017 that’s most likely to receive the most compatible accessories. It’s hard for accessory manufacturers you see; targeting every phone on the market is a losing proposition, because some phones simply won’t sell in big numbers. Betting on Samsung, though, is about as safe as betting on iPhone; it will sell in big numbers, and so prepare yourselves for an onslaught of cases, screen protectors, and more.

Here’s some of the best / most interesting we’ve seen thus far, though you can’t buy all of these in Australia just yet. This is my favourite case for the Galaxy S8, and the one I use daily when not reviewing something else. I bought mine online and imported it from China, but you can buy them in Australia now from Gadgets4Geeks. This is a thin case, which doesn’t add an awful lot of in terms of protection, but it adds grip and most importantly, three separate holes on the back for fingerprint sensor, camera and flash array. This is a godsend, because it makes finding the fingerprint sensor super easy. It’s also rather cheap by comparison to others, and it works VERY well with screen protectors of all kinds.

These cases will be some of the more popular, only because they were on sale early and in a number of readily accessible places. Like the Tech21 Pure Clear below, there’s nothing especially remarkable about it; there’s protection all around, though it plays a bit nicer with screen protectors. It has an opening for the fingerprint sensor/camera/etc which makes it a bit easier to find than on the uncovered phone itself, and it’s fairly solid despite its thin fit. A good, simple case.

This is a very simple, clear case. The edges are ribbed, giving it a fair rigidity which will protect your phone in the event that you drop or throw it. However, due to the extent that it curves around the edge display, if you use this case with a screen protector, it may well push it off the display. For example, I found it cracked a tempered glass protector I had on, though it played nicely enough with Tech21’s Imapct Shield film cover. While functional, and it makes the fingerprint sensor a bit easier to find, this is a fairly bland design.

As noted above, there are literally dozens of case options available for the Galaxy S8, and while some are more expensive than others, that doesn’t necessarily make them the best. To get a great idea of what’s available, in one place, check the Gadgets4Geeks case listing for the Galaxy S8.

Yeah okay, this is a weird one. LASER got in touch with us spruiking an alarm clock which doubles as an accessory for the Galaxy S8 (well, any modern smartphone with or without wireless charging). Yes, it’s an alarm clock that sits on your nightstand (or somewhere else) which you can pair via Bluetooth, and with a phone that supports wireless charging, you can charge your phone too. 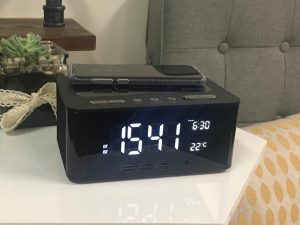 For me, the display on the clock itself is too bright, making it somewhat unworkable in my bedroom, but for others, this might be okay. The bluetooth speaker included is more than capable, and the inclusion of an FM radio for soothing tunes (or to use for an alarm) is a bonus. The inclusion of a thermometer for ambient room temp is interesting, but ultimately not all that informative. That said, if you like mixing old-school with new, this is an alarm clock you probably want to have – a clock which wirelessly charges your new Galaxy S8 is kind of fun.

If you pre-ordered your Galaxy S8, you’ll likely have received one of these kits for free, but if not, you can buy them for $199. We have one in the office, but given my last experience with VR, I’m not in a hurry to jump back on board (let’s just say it involved a bit of nausea and jumping in fear). Unlike the last generation Gear VR, the Gear Vr 2 comes with a wireless controller (like Daydream), which you can use to interact with games, apps and more. One of my favourite features for Gear VR? Using it to watch Netflix. Yes, you can do that. If you’ve got last year’s Gear VR, you can buy the motion controller seperately too so you don’t miss out.

At $199, find these in the Samsung Store for now, and bound to be elsewhere soon.

What fun or unusual accessories have you come across to complement your new Galaxy S8? Let us know the best in the comments and we’ll add them to our list.