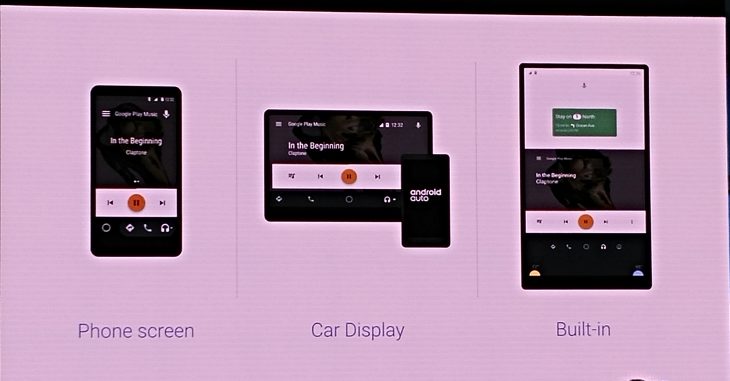 The other day Google blogged about how Android Auto would soon be arriving as an embedded system in some cars (Audi and Volvo at this stage). This afternoon at Google I/O more details were furnished to developers on what the system entails and how they could best make use of it within their apps.

We heard from two of Google’s partners with Android Auto, of which there are now over 300. Both Audi and Volvo talked about bringing the next generation of connected car to the market, of bringing a totally connected, stylish, digital cockpit to the driving experience using the embedded Android Auto. Audi talked about every single car in their upcoming generation will be fitted with an embedded Android operating system.

There are some additional APIs that allow the Android Auto to interact with the car itself but at this stage whether this is available for all developers is unknown — to allow any app to have control over essential car components could have massive security and safety implications. In saying that I would love an Android Auto app that was able to read data from my ODB2 reader and display it on my infotainment system interface.

Google talked about using cloud execution for developers and how they can implement these things within their apps — invocation triggers (“OK Google bake me a…”), dialogue (what the users asks for connecting to a service within an app) and fulfillment (gives the user an action). All the time the goal is to maintain safety and limit driver distraction.

Some examples of using the new implementations included “OK Google….”:

At this stage there was no mention of a wireless Android Auto but I have not given up on finding out more on this before I leave Google I/O this year — stay tuned.

Would you buy a car with embedded Android Auto? Would it tip the scales one way or another in your purchase?

I still think it’s important for car manufacturers to simultaneously support Android Auto and Apple CarPlay. I don’t think exclusivity would be a selling point.

Google still loves Apple (though I don’t know why sometimes…), so I’m sure you’ll be able to get Carplay to display on the infotainment unit.