As mentioned earlier today Google are moving into VR in a big way with a large chunk of Google I/O 2017 dedicated to Daydream. Two new features of the ecosystem have been announced today that are designed to aid the developer in their app development process.

One of the biggest challenges developers face when developing Daydream apps is the amount of time it takes to preview any changes they make to their code with Google quoting figures of three to seven minutes. Now with their new Instant Preview that time from change of code on your PC to seeing it in the app on your phone is just milliseconds.

Instant Preview is in effect only making the changes on the Daydream device that the user can see, not the entire content. From Google themselves:

The Instant Preview mobile app streams head pose and controller data to your game engine, where the plugin will render the scene in stereo and stream video back to your device.

The result of this is an instant preview of the app in near-real time, comfortable enough to be used for long periods of time. A subsection of Instant Preview allows the developer to only send across controller data to the editor on your PC. This allows the developer to edit and change controller interactions on the fly without having to worry about syncing across large amounts of data with each change in the editor.

What does this mean for you, the user? More VR apps with faster iteration and improvement, fast bug fixes. With easier development will come more apps that are not only greater in content but work smoother as developers can debug and bugfix the app many times faster. 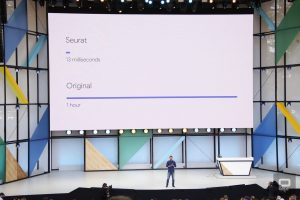 The other announcement to aid in the development of VR apps is Seurat. Named after a French painter, Seurat makes it possible to render high quality scenes on mobile VR in a fraction of the time it takes a high-end PC. Seurat does this by recreating only parts of the scene that it need to render for the visible medium.

This real time rendering will hopefully end up in much more mobile VR content being possible. Not available at this time Google hopes to have it available later this year.

Google I/O 2017 has shown how serious Google is with their VR and AR offerings. With these new developers tools we hope that we will start to see much more content of greater quality to go with the planned hardware releases.

Have you tuned in to the VR world yet? Is it something you are interested in?