Home News and Editorial More Daydream-ready phones coming from Motorola and Asus by the end of... Yesterday we heard that not only will the next LG flagship of 2017 be Daydream compliant but that the Samsung Galaxy S8 and S8 Plus will receive an update around the middle of the year to make them also Daydream compliant.

Today we heard that one of the leaders in AR, Asus, will not only be bringing their new AR phone, the Asus Zenfone AR, to market this year but also a Daydream-ready phone. With Asus already having innovative experience in the AR world it will be very interesting to see what they bring with their first Daydream phone.

The Asus Daydream phone was not the only Daydream phone outed today with an announcement that Motorola will also have a Daydream phone by the end of the year. Given what we already know about Motorola’s lineup of 2017 the supported phone will most likely be the Moto Z2 and the Z2 Play. What this means is that the Moto Z2 has now had it’s AMOLED display confirmed. It was suspected to be AMOLED before but we can now fairly safely say it is definitely AMOLED.

With the Moto Z2 devices supporting Moto Mods it will be interesting to see how the two could be combined? Will you have to remove any Moto Mods to enable connection with your Daydream headset? Will anyone be able to make some form of Daydream Moto Mod? How about a Mod that uses the Daydream as part of it’s functionality? As I’ve often said, the possibilities with Moto Mods are endless. 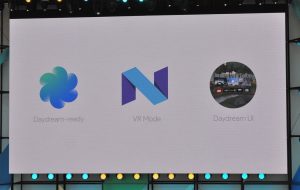 By the end of the year Google expect there to be tens of millions of Daydream-ready phones which is something of an understatement given that support is coming to the Galaxy S8 and S8 Plus in the next few months. We thus expect development in the VR space to move forward exponentially as developers attempt to cash in.

After what we have seen today it promises to be an exciting year for VR and Daydream. Will you be buying a Daydream-ready phone this year? Is it something you will be taking into account before making your purchase on your next daily driver?