LG has really only begun to move into the ruggedised phone business with the LG G6, but they’re also bringing that ruggedisation to the mid-range announcing the LG X Venture.

LG’s X series of phones offer a mid-range device which concentrate on offering a decent phone but with a highlight on one specific feature, in this case – ruggedisation. It’s a phone made for adventure with IP68 compatibility for water and dust resistance, and it’s also passed 14 different U.S. militarys MIL-STD 810G tests for resistance to extreme temperatures, shock and water.

In keeping with the rugged theme, LG has included a barometer, compass, activity counter (steps/calories/distance), exercise tracker, weather reporter and flashlight, as well as a Quickbutton that can be assigned different tasks when either double pressed, long pressed, short pressed – etc. There’s also 3 physical keys on the front to make it easier to use, and the screen has a ‘Glove Mode’ for those colder weather climates.

All that and it also has a fairly decent spec sheet.

Consumers with active lifestyles want devices that they don’t need to coddle or worry about when they’re on the go. But the LG X venture isn’t a ruggedized phone that makes sacrifices. Its long list of features, long battery life and excellent photo capabilities makes it the ideal companion for customers who wants a phone that works anytime, anywhere.

The X Venture will come with a metal frame to really drive home that strong, rugged look in a black or brown colour option. It will also have a non-slip back cover to help use it while it’s wet. 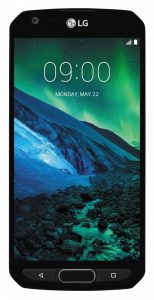 The phone is starting to rollout today in the US, with the intent to launch it seeon in Europe, Asia, Africa, the Middle East and Latin America in the weeks to come. We’ll be checking in to see if LG Australia is bringing this X Series phone to Australia, and sending a willing (or perhaps not so willing) Ausdroid volunteer on an adventure with it if it does.

Only 2Gb RAM! What were they thinking?