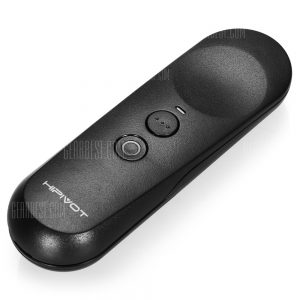 Since launching six months ago, Daydream has essentially been dominated by the Google made Daydream View, but those days are over at least when it comes to the controller with a third-party device now available to buy separately.

The Hipivot Daydream Mobile VR Somatosensory Action Controller is now available to buy for $39.99USD from GearBest offering anyone the chance to get a controller for Daydream, without investing in a $119 headset/controller combo.

The controller is essentially the same as the original – although a little thicker – with a touchpad as well as Home and Menu buttons. It doesn’t appear to have volume controls, but everything else appears to be good to go. It’s powered by 2x AAA batteries, which can make it easy to quickly replace when you’re up for a long Daydream session.

So, why would you want to buy a separate controller? Well, at this stage there’s no way to buy a controller by itself from Google, so if you break (or lose) your Daydream View controller here’s an option. You can also purchase a cheaper third party Daydream compatible headset and then use this controller.

If you’re in the market for a new Daydream Controller, then head over to GearBest to order your Hipivot Daydream controller now.

Affiliate link used for Gearbest – using this supports Ausdroid without costing you anything.