The Asus presence at Computex was quite stunning;  they have all of their main product lines on display and staff across the stand to talk to about them. The ZenPad 3s 8.0 has quietly appeared on their product list, and fortunately, we had a bit of time with it at their booth.

If you’re looking for a really quick and simple wrap up on this tablet, I’ll give it to you like this: this is the successor to the Nexus 7!

I know it’s an 8-inch screen, but the footprint is only slightly larger than the 2013 Nexus 7, and I feel the tablet market (that which remains at least) has moved past the want for a 7-inch tablet because of the increasing size of mobile phones. Let’s take a quick look at the ZenPad 3s.

The ZenPad 3s 8.0 features a metal body which is just 6.9mm thin and has a seriously stylish .85mm bevel on the front edge, making it really nicely rounded without being slick to hold. It’s running Android 7.1 with ZenUI 3.5 which (like may other OEM options these days) is quite unobtrusive. A 7.9-inch screen runs at 2048 x 1080 resolution. The internals are reasonably high end too, particularly for a smaller form factor tablet featuring a SnapDragon 652 processor and an Adreno 510 GPU. Depending on which of the two options you get (or perhaps become available in Australia) you’re looking at either 32 or 64GB of storage and either 3 or 4 GB of Memory.

Cameras on tablets are generally fairly unimaginative, especially as mobile cameras are generally significantly better than the camera worked into tablet hardware. That being said, the main camera on the 8-inch ZenPad is really quite good — a 13 Megapixel camera with an f/2.0 aperture and an LED flash. There’s a 5MP front-facing camera too, for anyone wanting to make video calls or send the occasional selfie.

Much like the 10-inch version, the 8-inch ZenPad has DTS 7.1 Surround sound when plugged into the “right” headphones. For times when you want to share your audio with others, you’ve got dual speakers for stereo sound and the speakers aren’t bad at all. I’m not sure if it was what was around me at the time or if it was actually the case, but these seemed better than the 10-inch version of this tablet. 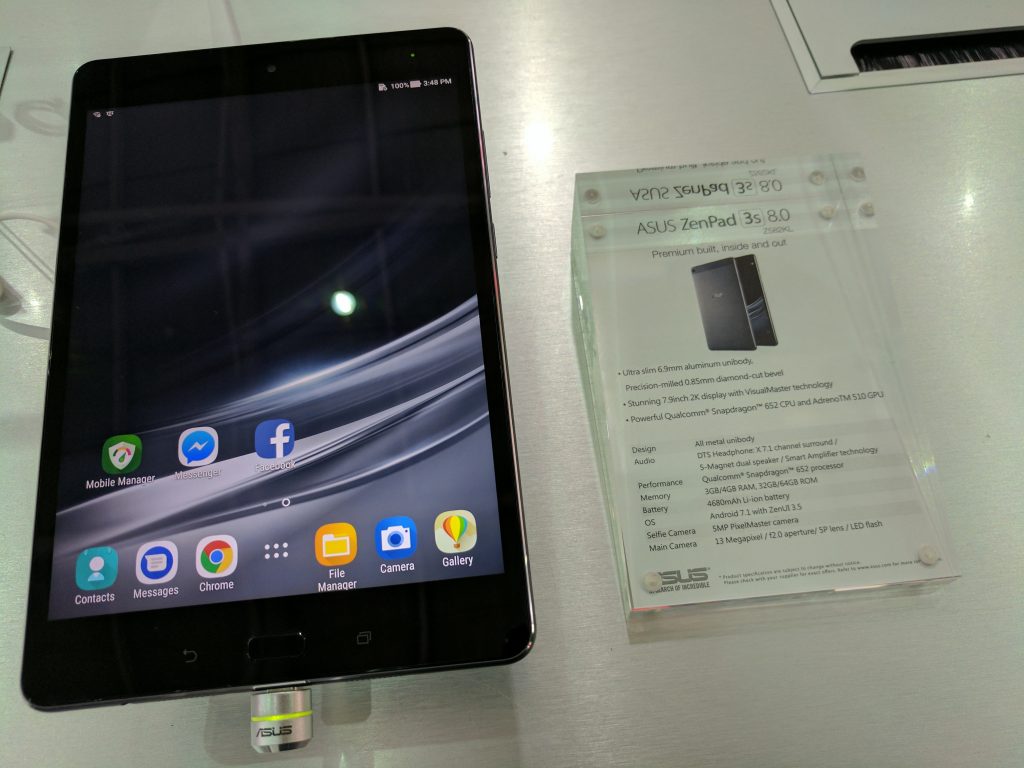 What makes the ZenPad 3s 8.0 stand out in the crowd for me is the 4,680 mAh battery; the same capacity as the 10-inch version. At that capacity, you’re going to get some fantastic battery life and make this a really useful tool not only for entertainment but productivity on the run.

In discussion with the Asus staff at their Computex stand, the 8-inch Zenpad 3s will be available in Australia “soon” and while a date didn’t come forward, there was vague discussion of early Q3 this year at AU$470 which isn’t cheap, but extremely affordable for a good quality tablet.

Waiting, waiting on the Lenovo tab 4 8″ plus. If that doesn’t turn up then this one will do nicely. Anyone know what Asus are like with their updates? Any better than Lenovo?

We’re hoping to hear from Lenovo this week about plans for the Tab4 range. We can’t wait to see them here after some hands on time at MWC. Don’t know much about updates for either brand at the moment.

Great to see a manufacturer bringing out a good tablet.