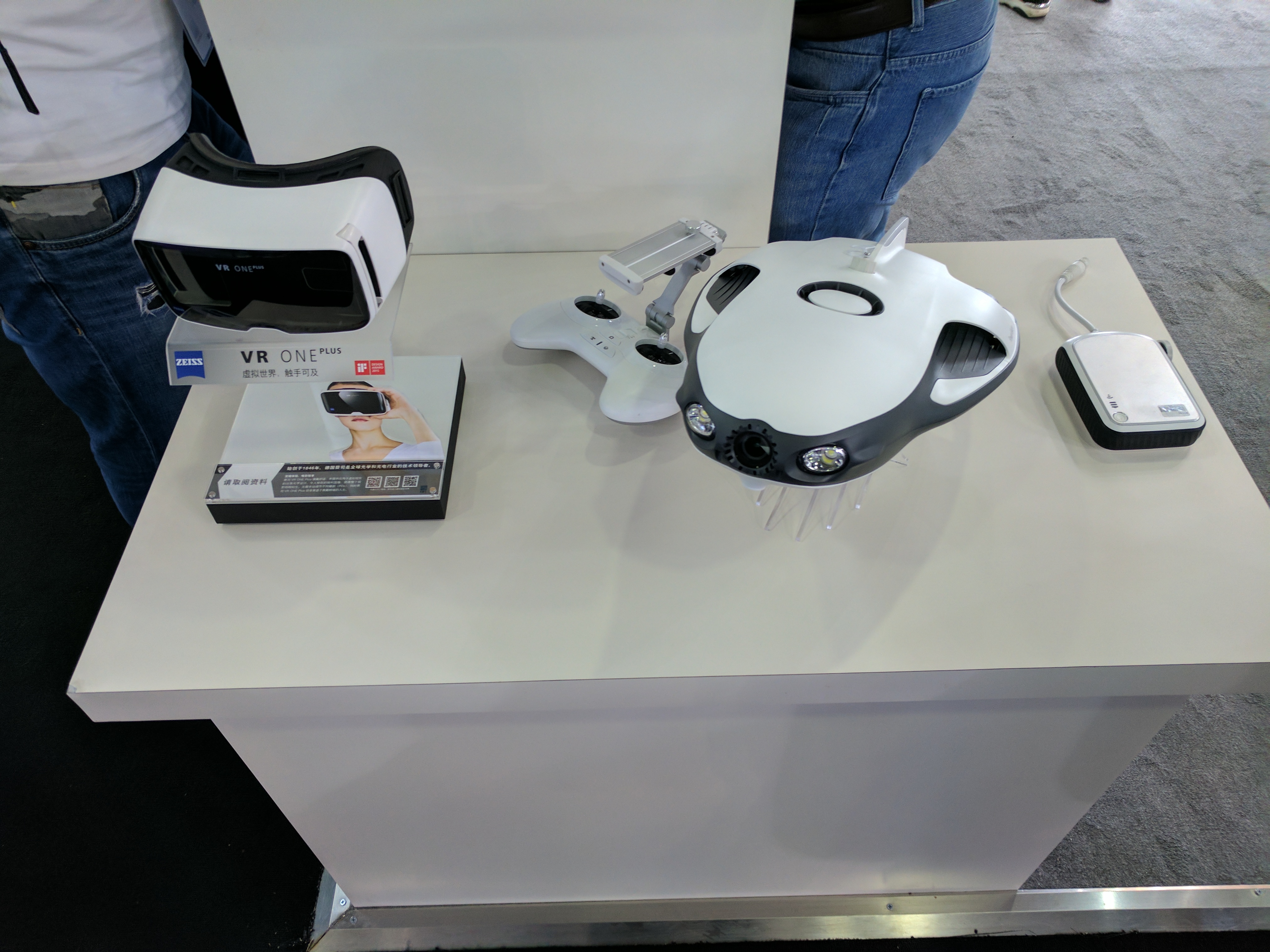 We’re all familiar with flying drones, but a new class of drones appear to be entering the market with underwater drones showing up here at CES Asia. One of the better designed ones is the PowerRay, a submersible you can control remotely with a camera on-board you can view in real time on your phone.

Saying ‘remotely’ is a little bit mis-leading as the drone is tethered via a cable that can run up to 100 metres in length back to a base station that then transmits and receives signal. The tether can run up to 100m, but the base station can only transmit to your smartphone up to 30metres, and the radio controller to guide the PowerRay only transmits 10 metres anyway.

If you tire of looking at the view from your smartphone, you can use a pair of VR goggles, made with Zeiss optics, to enjoy a first person view from the drone.

The PowerRay can stream 1080P quality video from the base station to your smart phone, but it records in 4K UHD resolution on-board where it saves to built-in storage – you get options of 32GB or 64GB – so you can retrieve that once you’re back on dry land. Video is enhanced by twin spotlights mounted either side of the camera module, a valuable addition if you start descending into the deeps of the ocean, or body of water of your choice. I wouldn’t be going too deep though as the PowerRay is only rated to a depth of 30metres. The PowerRay is very much aimed as an exploration device, as well as potentially a fisherman’s friend with a fish finder attachment that can tell you where the fish are while your boat is anchored. You can also detach the module, tether that and drop it over the side of the boat to get a better look at the seascape beneath you. It can supply data about what’s around you from between 0.6-40 metres in depth. The PowerRay also has a series of blue LEDs on it which can serve as a fish attractor and if you really want to cheat, you can get an attachment which lets you attach your fishing line and drop it exactly where you want it.

To say the PowerRay is a lumbering device is certainly not true with a top cruising speed of around 3~4 Knots (2m/second). That will drain your battery fast though with the device running flat in about an hour if you zoom it round. Piloted more sedately, you’ll get around four hours of use from the PowerRay before needing to recharge. According to the rep at the PowerRay booth, you charge the base station and this in turn charges the PowerRay and the FishFinder as well.

It looks pretty impressive as it’s going through the water though, and PowerVision had a massive pool installed in the CES halls to show it off:

The reality of the PowerRay is that this is no toy for the kids to play with. It starts around 9,000RMB ($1753.94AUD) for the base model and can run up to as much as 15,000RMB ($2923.23AUD) for the most expensive model, that said…I kinda want one. We saw aerial drones start out quite expensive when they first launched, so hopefully it’s not to long before we see the price on these come down too.

Not the cheapest model out there but could still be a good option.