Google’s Local Guides program is about to get its biggest change since it’s launch, with the program growing from 5 levels to 10.

The addition of new levels adds more ways to earn points and a new tiered point system to reward more valuable contributions like reviews or adding new locations onto the map and of course throwing in a couple of new rewards to kick the whole thing off. Details on the specifics of the program are still emerging with the update “rolling out over the next few days” so let’s look at what we do know.

Google has doubled the number of Local Guide levels from 5 to 10 and increased the points target by 200 fold, growing from 500 points for a Level 5 to a whopping 100,000 points for a level 10. With level 5 relatively easy to achieve, especially for legacy Map Maker users who typically jump straight to level 5 when their previous contributions were recognized.

As Local guides level up the ranks they will gain access to new perks, the details of which have yet to be released, as well as unique badges for each new tier.

The table below list the new levels, their required points and the badge you receive after attaining level 4 status.

Starting today users who reach or are already at level 4 or above will receive an offer for 3 months free access to Google Play Music, assuming they aren’t already a subscriber or have claimed another free period within the last 12 months. The same Guides will also receive a credit for 75% off one movie rental from Google Play Movies. Local guides have until 31 August 2017 to reach the required level and then must claim the rewards by 30 November 2017.

Earning points in the updated system have also been enhanced. The basic mechanics is the same, however, the range of actions that will receive points has been expanded, and the number of points has been changed to seemingly reflect the utility of those actions to the overall Google Maps platform because Local Guide exists to crowdsource up to date information for Google Maps.

Check out the table below for all of the ways you can now earn points, and how many points each will give you. 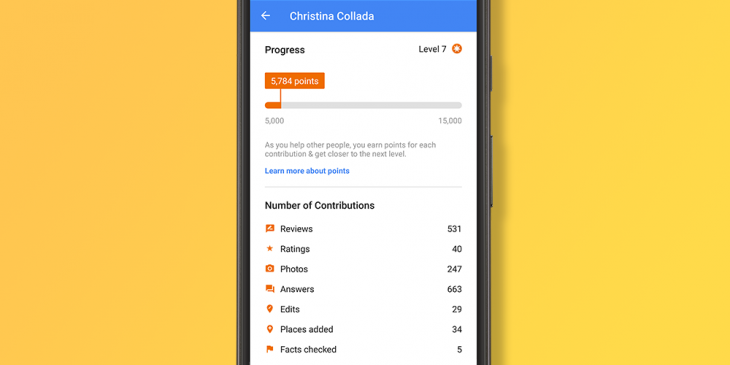 It’s not clear yet if people will be retrospectively credited points for their existing edits, however considering how Google has handled previous updates it’s a safe bet you will. After some quick math it looks like my current contributions should take me from a Level 5 with 2015 points to a Level 8 with just around the 15,000 points mark, I’ve got a long long way to go.

Google has added two new ways to grab some points, ratings and facts checked. If you don’t feel like writing a full blown review of you local service station, but want to give them 5 stars because they’re awesome you’ll now get 1 point for that. Same for checking other contributions to the map, each “fact checked” will net you 1 point, local guide missions is a good way to rack up points.

For those looking at the 15 points for adding a new location to the map, know that anything that is added and subsequently removed will not count towards your total, and as in previous programs continued gaming of the system will get you banned, so play nice and only add real data. With the facts check component of Local Guides false information will be found.

I wouldn’t call this a simplification of the program, however, it is definitely a nice expansion and does address the “concerns” of power users who had reached the level cap and weren’t getting recognised for their superior efforts! With the program set to roll out over the coming days, we will keep an eye out for more details of the program and perks and let you know.

I think I was level 3 on the old system and am not level 5 so will be good to get the rewards as I do not think I got them before. That you can just star rating everything is good too as for most situations I do not really want to write stuff about places like your local petrol station as you say.

submitted about 80 photos total for several different reviews about three days ago and no points bump obvious, I seem to have approximately the same points I had just from my reviews and related questions (around 70)

EDIT : nope , this is cool, its now at around 700! checked via the PC instead of waiting for any update to points on phone!