Home News and Editorial OnePlus 5 — The storm before the storm

The 20th of June has snuck up on us that is for sure. Maybe OnePlus have just not annoyed us with so many leaks as in previous years but this year it has raced up on us. At 2am tomorrow morning AEST OnePlus will be announcing their (first?) 2017 flagship, the OnePlus 5 and we seem to know a lot about it these days. No one does surprise announcements anymore — leaks are the in thing.

Overnight we had quite a few leaks and official information show up. We saw Evan Blass give us a look at the official press render of the OnePlus 5. There does not appear to be much in the way of surprises with this one with the presence of their volume rocker and sound slider on one side and the power button on the opposite side. We see the expected dual camera — it seems nearly everyone is doing it this year.

They weren’t the only press renders we saw today. We saw some semi-blurry renders leak showing the phone from all angles and yes, there is a headphone jack present on the bottom of the phone.

Speaking of the dual camera it seems that from the video OnePlus have been considering it since last year but before now decided it was too costly to educate the public about the advantages of a dual camera system. Some are reporting that it is now “etched in stone” that the OnePlus 5 will use the standard lens 16MP camera combined with a 20MP telephoto lens for their rear dual camera. This is not really a surprise considering the phones apparent big brother, the OPPO R11 uses the same setup. There are also a lot of OnePlus “in-house” optimisations tacked on which may account for the monochromatic image that OnePlus co-founder Carl Pei tweeted out today:

Following on from last nights leak which showed possible pricing of the OnePlus 5 in India we see what appears to be the official Amazon pricing in India. At 33,000 Indian Rupee for the 6/64GB version and 38,000 for the 8/128GB version it seems OnePlus are moving their pricing up towards the high end pricing. The above pricing equates to around $750AU but by the time you factor in shipping and the lack of a local warranty the pricing is certainly up there.

We are yet to hear from any local grey market importers but I would suspect those that sold the OnePlus 3T will also be selling the OnePlus 5. At this stage OnePlus are not bringing the phone direct to Australia but they are watching our market closely to see if selling direct here would in fact be feasible after all. Today we also saw a YouTube video released by The Verge called Making the OnePlus 5. They were invited to the OnePlus head office in Shenzhen, China where they interviewed many of those involved with the important design and hardware decisions of the OnePlus 5. The following video gives a great insight into what went into making the OnePlus 5. Although it is nearly nine minutes I encourage you to watch the entire video if you are even remotely interested in how a company decides on various features.

One thing of note from the video is that OnePlus has a large advantage being located in Shenzhen. All the main hardware suppliers are local to them so if they send out the word for a design they can receive mockup by the next morning. This accounts for the large number of prototypes and mockups we saw in an image doing the rounds today. 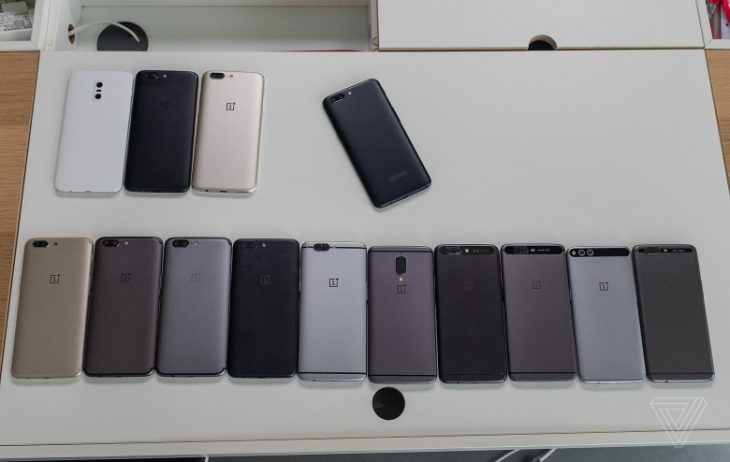 So many phones but what does it look like in the hand? How about some unboxing images then? These are compliments of the MyDriver website and show the phone in a deep black colour but also a wooden plated back.

The wooden plated back gives away something else we saw today — Style Covers are back. Remember the Style Covers of the OnePlus One? The ones where it was near impossible to actually remove the back cover to get the different one on? OnePlus are bringing them back and in various colours. While possibly not the final number of colours and textures we can see in the image below there are, as Android Police label them, a rosewood case, “Karbon” case, ebony case, and a sandstone case. Hopefully they are easier to replace than those for the OnePlus One.

@OnePlusReport Here I have the exclusive photo of OnePlus 5 with cases ! Pls share pic.twitter.com/02MDiBVOKd 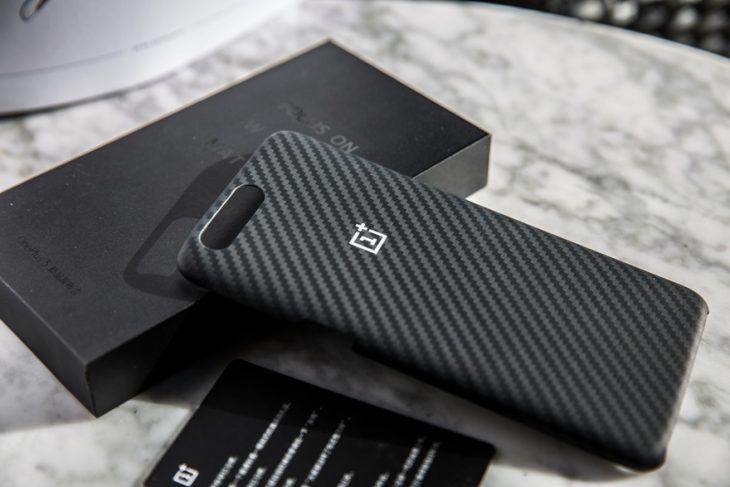 So let’s wrap this up for now. It seems the OnePlus 5 is coming in two variants, a 6GB RAM/64GB storage and a 8GB RAM/128GB storage version. Both will be powered by a Qualcomm Snapdragon 835 processor. The display size and resolution is unknown at this stage although it is speculated to be a 5.5in AMOLED display. 1080P is the rumoured resolution but it would surprise me if OnePlus did not bump the resolution to match the high end specs of the rest of the phone — 2K please OnePlus.

All will be revealed in the early hours of tomorrow morning. I am going to attempt to get up to cover it so you don’t have to wake. Just check out Ausdroid first thing in the morning. Hopefully we will also have some news on where you can purchase one. It looks to be a beast of a phone.