Google has kicked off a massive Android Pay promo this morning offering over 200,000 prizes worth $1.6 million in total, but the catch is it’s only for new users.

The prizes are being offered to users who either haven’t added a card, or have never actually used one that’s been added. Google says that simply using either a card you haven’t used before, or adding a card will get you a prize envelope. Each envelope could contain a gift vouceher from either Myer, Coles, Rebel, Boost Juice or Event Cinemas. 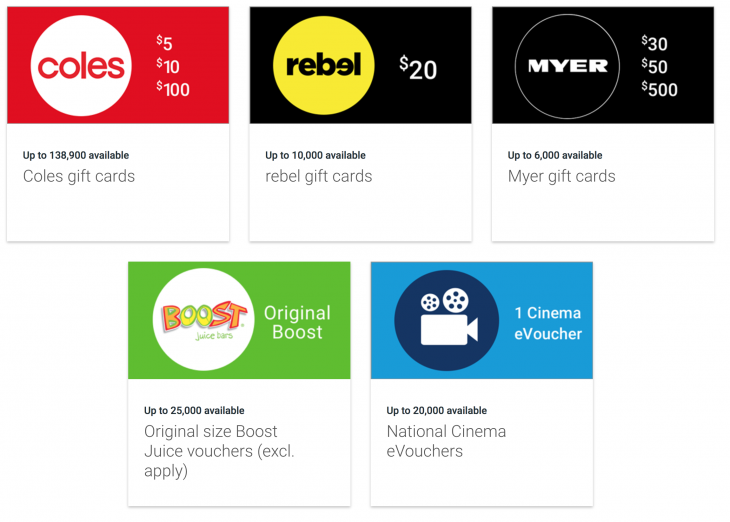 Android Pay is simply an NFC based payment system, so if your store has a Tap & Pay based terminal for cards, you can use Android Pay – well as long as your bank offers support (shakes fist at St George). Android Pay is also available to use as a payment method as an in-app payment in a number of Australian apps such as Dominoes, Catch of the Day, Hotels Tonight and lots more so that should make using Android Pay 10x a day even easier.

The promotion runs until 23:59 AEDT on the 22nd of December or until all 200,000 prizes have been given away (whichever is earlier), so get in fast.

I’ve found android pay doesn’t work well with Coles thing-a-ma-jiggies. Seems to work better if the terminal has an extension tap-and-go sticking out of it. I would also like to set a pin on the app so it can’t boot up without it, at least make it an option for us paranoid users.

Still waiting for St George to get off their arses and get Android Pay working.

They have their own Android pay platform that competes with Android Pay – either they may never support it or they will be the last to adopt it ;-(

My Nexus 5X died (again) so I’ve just been sent a replacement by Google (which is great). The old phone had my cards set up on Android Pay, but I had to set them up again on the new phone. I’ll see if that counts as new cards for the promo.