The Moto X Force was late to arrive on our shores but we were fortunate to get a look at it not long after. At the time, September 2016, the software on it was nearly nine months old and had not seen a security update since December 2015 leading us to wonder whether it would ever see any. This was concerning because the phone was also listed as vulnerable to Stagefright as well as the Quad Rooter security vulnerabilities.

To Motorola’s credit today they have begun rolling out Android 7.0 Nougat to Moto X Force phones purchased from their website. Ausdroid reader Ammad sent us a message via Twitter confirming that his Moto X Force purchased from Moto Online was receiving the update along with the link for the changelog. The changelog confirms that the Android security patch up to April 1, 2017 is included in the update. Along with the security update it also brings all the usual goodies from Nougat. 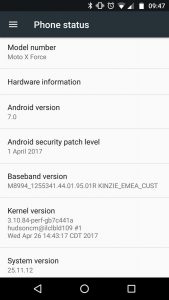 The update itself is approximately 980MB so if you are a Moto X Force owner who has not received the update just yet charge your phone, connect to a Wi-Fi connection and hit the refresh update button in your settings (although we have been told that it does nothing to speed up update arrival).

It is good to see phones that are nearly two years old receiving full Android updates. Motorola should be commended for providing this update, even though it is eight months since Nougat was released to the world.

We love seeing updates to phones — if your device receives an update hit us up on any one of a number of channels — Twitter, Facebook, email, Google+.