Motorola hosted an event in Sydney this morning to launch three new phones – the premier Moto Z2 Play, the Moto E4 and the Moto C – down under, starting tomorrow.

The Moto Z2 Play is the latest from the company to support their Moto Mods expansion accessory line, with a wide array of possibilities for expansion.

Last year’s original Moto Z was well received by Australia, offering both high end specs and a super thin design together with some surprising options for expansion from Moto Mods – a projector connected to the back of the phone, a game control pad and a premium Hasselblad camera were just some of the Mods on offer. This year’s followup, the Moto Z2 Play, moves down to the Snapdragon 6xx series processor (the SD 626 to be precise) but pairs it with 4GB of RAM. The 6xx series processor should afford the Z2 Play some excellent battery life and that’s likely worth the small dip in performance.

The display remains a 5.5 inch AMOLED panel with 1080p resolution. In fact, the body size overall remains much the same but its still thinner and lighter, otherwise you wouldn’t be able to clip last year’s Moto Mods — still compatible, with a 3-generation guarantee from Moto — onto this year’s phone.

Motorola is launching on Android 7.1, and committing to security updates every 90 days. There’s a few neat tricks packed into the phone too, with the Moto Voice system offering “instant queries” for things like weather or calendar, while the fingerprint scanner supports some swipe gestures to make navigation easier. Moto Display, the ambient notification display system, also makes a return. We’ll see two new Mods in Australia at launch too, both focused on the battery — a TurboPower Pack will recharge the phones battery to 50% in just 20 minutes, while Style Shells come in a number of great colours and designs, and bring fast wireless charging support to the phone. Motorola’s also talking about bringing the Gamepad Mod here.

The Moto Z2 Play is coming to Harvey Norman, Good Guys, Officeworks and other retailers tomorrow (that’s June 30) at $699. The new power pack and Style Shell Mods will be available alongside the phone, priced at $100 and $50 respectively. You can also order online at motorola.com.au. Motorola takes a step down by taking a step up. The E range was the company’s rock bottom budget phone in years gone by, but moves upmarket a little with the E4. Moto skipped the previous generation for Moto E in Australia, but it’s back with the E4.

The E4 is a Dual SIM 4G phone with a 5-inch 720p display behind 2.5D glass. It’s powered by a quad-core Mediatek processor with 2GB RAM and 16GB storage and up to 32GB added via Micro SD.

This generation gains a fingerprint scanner to the E’s party tricks as well.

You’ll be able to pick up a Moto E4 in Iron Gray and Blush Gold at JB Hi-fi, Harvey Norman, Good Guys, Officeworks(and online direct from Motorola at www.motorola.com.au) for $249.

So, with the Moto E4 moving upmarket there’s space to introduce a new budget line – the Moto C. 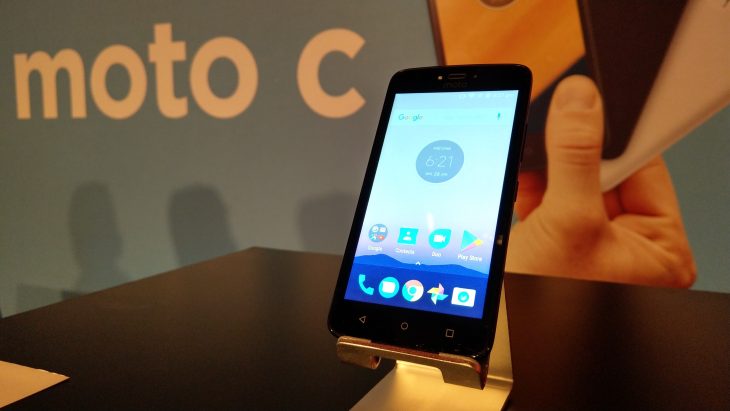 The Moto C is coming in at just $149, and makes a great case for itself at the budget 4G price point.

Powered by a Quad Core Mediatek processor with 1GB of RAM, the phone comes with 16GB storage onboard (+32GB via Micro SD) and runs Android 7.0 on a 5-inch FWVGA screen. There’s a rear 5MP fixed-focus camera with a front-facing 2MP fixed focus camera with a “Selfie Flash” and a 2,350 mAh battery to keep things going.

You’ll be able to pick one up at Harvey Norman, Good Guys, Officeworks, Woolworths, Australia Post, and Coles (and online direct from Motorola at www.motorola.com.au) for $149.

Motorola’s also teasing some more announcements about availability in the next few weeks.

Keep an eye on Ausdroid for reviews of Motorola’s new range soon!

Will you be looking to make a new Motorola phone your next? Tell us in the comments!

I feel like there’s some confusion in this article; last year we saw the Z and the Z Play. Everybody seemed to want the Z Play because of the battery life. This year they have release the Z2 Play only (so far?). The processor is actually marginally better (not worse), going from Snapdragon 625 to 626. RAM up fromm 3GB to 4GB. Battery life has dropped (because phone is thinner and they are flogging a Moto battery pack instead). Anyway, the price is still good. The Z Play is a fantastic phone and I expect the Z2 Play will be… Read more »

I agree. they managed good performance at 1080p on the 625 and will do on the 626. the battery capacity of the phone should take it beyond the duration of flagships from big brands and the new battery mod packs heaps more capacity inside compared to all the packs from last year, I think its around 3500mAh vs max of 2200 last year for the packs. so you have a slim phone, better battery performance than most phones and the option to alter the camera,go for big speakers,use a projector or give yourself several consecutive days of battery with the… Read more »

I guess I can wait.

I’ve only ever bought one Motorola, the Nexus 6 and I loved it up until my 3 year old son tried to teach it to fly with a shattering ending. As like most people on this site I am a phone tech nerd and I find it so easy to recommend Motorola phones to my friends. 2 Moto G3, 1 Moto G4 Play and 1 G4 Plus and all of them were happy with the phone. It’s really easy to give good phone purchase advice when you recommend one of these phones. As 90% of the population don’t care about… Read more »