Telegram has begun rolling out version 4.1 of their app for Android and iOS, and it brings with it a number of improvements for Super Groups, as well as Android Pay for bots and privacy tools.

Telegram v4.1 brings an increase in the number of members that can join a super group, increasing from 5,000 members to 10,000 – twice as good right?

To control all those new users, Super Group admins will get more tools, including a search function to find specific members – a function that users of the Super Group can use as well.

Other tools include the Super Group admin can give specific rights to other admins, allowing them to add new users, manage messages, block members, edit group info, or even add new admins. In order to maintain a ‘nice’ group, admins can now effectively put users in a corner for a brief time. Admins can remove abilities from the users for a defined period of time, limiting whether they can send or receive messages from the group, send media or stickers or even links.

So you can see who imposed a ban on functions, admins can now see a ‘Recent Actions’ list on a separate tab. 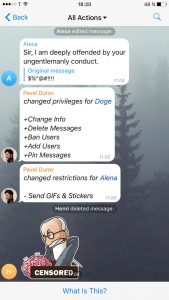 Finally, if you want to automate some of the admin rights, bots can now be programmed to impose some of these temp bans as well.

After adding Bot Payments to Telegram back in March, Telegram has added support for Android Pay as a payment method in this version of Telegram. Telegram payments are handled by Stripe, so this change must be in response to a change on their end.

photos and videos are now shown together when sharing from the attachment menu or gallery.

Telegram is also getting more into privacy. In this version, you can now setup a proxy server to handle messages in the app. If you look in the settings menu, you can now add one in the ‘Data and Storage’ section.

We believe in free and secure communication. It’s our responsibility to offer technology to defend our users’ right to privacy and freedom of speech around the world.

We’re big users of Telegram here at Ausdroid, and even have our own bot to keep us entertained. If you’re looking at other messaging apps until Google sorts out their messaging mess, check it out.