There has been a few misconceptions lately regarding the new “Android Auto” and its application in the car. Many, myself included, thought that the new implementation of Android already built into the car was another version of Android Auto. How wrong I was.

Android Auto is either a projection from your phone to the head unit of your car, or runs on the phone’s display. An Android-powered car is just another device that Android runs on. It is the standard open-source Android running on a very large device with four wheels. As such, it is open for the manufacturer to skin it however they feel like. This way a manufacturer can make their infotainment system look and behave however they want it to but the backend of it is powered by Android.

Why the big deal then I hear you say? It means that this Android system can run any of the apps that your other Android devices can run (those that have been certified for automotive use). The problem is though that it seems that no one seems to have any real idea how this system is going to work in real world cases. 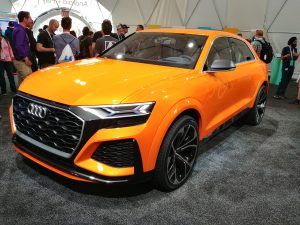 How do these Android apps get to your car infotainment system? Does you car need a Wi-Fi connection for this? Do you need to connect your phone the first time you load apps and again each time you get a new app? How does the car know who is using the car to select the correct user (multi-user profiles)? How does the car know which user is selected and how do you authenticate that user? How do you enter logins and passwords for the apps? So many questions that do not have answers, and if they do they seem to have conflicting answers. Everyone we spoke to either said they did not yet know how all this was going to happen or they had conflicting answers.

At the Android Auto roundtable we were told that the user would authenticate themselves with the Android-powered car using their phone but then at the Android Auto I/O session we were told that a phone was not required, just as I was when doing the Android in the car demo. In a query to the Google developers themselves in an attempt to clear this up they replied with “No phone is required to use Android-powered car systems….as it’s not an OS”. Confused again? I am. It seems that it has not been decided how multiple profiles will function securely in the real world.

When I asked at the demo about how apps would get onto the car there was no exact answer anywhere. When I asked at the Audi demo I was told that they are still working through that and haven’t figured that out yet. Google at the round table said that it uses your phone but the Volvo demo said that “we are still working through the app installation process”. “TBD” was the answer from Volvo. 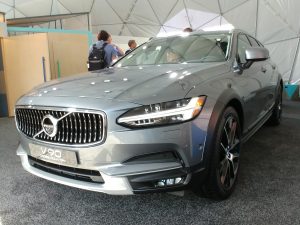 At this stage it seems that the Android-powered car is very much a work in progress, with many features and functions yet to be ironed out. I can give you a quick overview of my thoughts after checking out the very early versions of Android in the Audi and the Volvo very closely.

The Audi launcher is very similar to the Android Auto interface except with the tabs along the left hand side of the display instead of the bottom. Audi have a very dark, understated theme which looks incredibly stylish and well done. Audi have designed the interface to fit in seamlessly with the car interior so that it looks like it belongs. The home page is split up into three viewable sections — media, maps/navigation and car information. It was my favourite of the two I saw this weekend. You can see a good overview of it here:

Each manufacturer also build into the infotainment system apps that can be used to run the car functions. These include the door locks, HVAC, speaker system, radio (DAB+ etc) and so on. No longer is there any need to buttons and knobs to operate the temperature in the car. It can all be operated from within the Android-powered system.

Volvo’s Android UI was less polished than the Audi one and seems to not be as far along in it’s development than the Audi UI. The UI, while not as stylish and understated as Audi’s, runs on a massive touch screen which looks amazing. Instead of taps, Volvo have menus or tabs that open when touched. The tabs are for maps, media and system operation. Their UI over the top of each app also seemed less polished than the Audi one but once they finalise it I suspect it would be an absolute pleasure to use on such a large display. You can see the Volvo UI in operation in the video below and the images immediately above.

So when will all this be ready? Before Google I/O 2017 we were told next generation and possibly this year for Audi but considering all the features that still have TBD next to them I would suspect we would be lucky to see it by the middle of next year. Volvo told me that they expect to see it in the next couple of years.

The entire Android in the car, whether through embedded Android or Android Auto, is in very early stages of it’s development. There is a lot of very active development happening in all sections of the segment with new features/fixes constantly rolling out to Android Auto. The manufacturers want embedded Android to work as it gives them an easy platform to build their infotainment on top of making it easy for them to update. This will only arrive on new cars in the coming years but as mentioned above it still has a long way to go before it is ready for the market.

Android Auto still has a ways to go as well with many features still annoying and the lack of a wireless solution but it is a solution that everyone can use, no matter the make or age of their car. It is still better than anything any car manufacturer has ever come out with and Google have only been at it for a few years. Expect it to improve and add features as time rolls on.

Perhaps the first thing to note is that a Android-powered car is indeed a scary thing (and highly unlikely given that the electronics powering a car are completely different to your mobile device – authors, get your terminology right, huh?) Android powered car entertainment system, perhaps less so (provided the whole thing is fenced off completely from the actual car ECU and its submodules). There are already way too many vulnerabilities built into your average modern car. As much as I love Android… do we need yet another one (and one that would in fact provide a massive conduit to… Read more »

This is cool, though I agree on this “Android Auto still has a ways to go as well with many features still annoying and the lack of a wireless solution but it is a solution that everyone can use, no matter the make or age of their car. It is still better than anything any car manufacturer has ever come out with and Google have only been at it for a few years.” Thanks for posting!

I’m sure it’s not because it can’t be done. It’s because it’s clearly not an optimal UX. Android is a great interface for mobile devices but for a car’s dash it doesn’t make as much sense – it’s unecessarily complicated for someone trying to use it while controlling a vehicle at 100kmh. This is the very reason Android Auto exists and why Google’s efforts for car infotainment and control are focused in this area rather than a clumsy fudge of its mobile UI. EDIT: I see you did in fact suggest a car friendly launcher but I guess Google needs… Read more »

When I look at these interfaces I can’t help but feel they’re way too involved. Are they better then existing car infotainment systems? Absolutely. Leaps and bounds better. But it still looks very much like a slightly restrained smartphone experience – and this isn’t enough restraint as far as I’m concerned. The more options you add to the touch screen, the more you invite the driver to fiddle with something when they should have their eyes on the road. You might as well be playing with your phone. It’s dangerous. The way I see it, it seems like Google is… Read more »

There’s some gold in your comments there. I couldn’t agree more with the functionality in the embedded android systems. You have to remember though that a lot of the added functionality is in adding the car functions to that android interface. The issues start when you consider that these companies may struggle with making a simple eyes of the road interface. You’ve kind of hit the nail on the head there mate. Google’s grand plan may well be autonomous driving cars

Yeah, in a way I think the original culprit of this dilemma is actually the auto industry. As smartphones exploded in popularity, people came to demand the same level of connectivity and functionality everywhere. The auto industry responded by layering unnecessary complexity into car infotainment systems. So instead of car buyers benefiting from a seamless way to remain connected, they ended up with a one tonne death traps. Harsh but arguably fair. Enter Google and Apple who have already shown how much better a job they can do with a car infotainment and control UX. But at the same time,… Read more »