Motorola have been very busy lately with the announcements of their 2017 offerings. We have seen the Moto Z2 Play release here in Australia but have yet to hear anything regarding their flagships, the Moto Z2 and Z2 Force (assuming that is what they are called). Today Evan Blass has laid the press shot of the Moto Z2 Force out for all to see.

The Moto Z Force was extremely similar to the Moto Z here in Australia. The Force did not make it to our bricks and mortar stores but did appear on the Motorola website for purchase. The main differences between the two was a higher resolution camera, bigger battery and better drop protection on the Moto Z Force. For this reason we can assume that the Moto Z2 will be extremely similar to what we see in the tweet from Evan.

There are some interesting tidbits to take away from the image. The fingerprint sensor is on the front with the Moto name directly above that. On the Moto Z2 Play the Moto name was above the display but underneath the earpiece. The result on the Moto Z2 Force is a massive bottom bezel, looking to be bigger than anything Moto have produced previously. The leaked image of the Moto Z2 does not have this bezel. 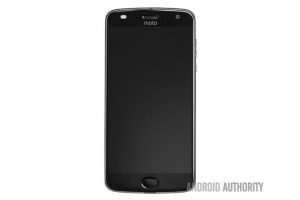 Once again, like on the Z2 Play, the speaker appears to be hidden within the earpiece. The phone also looks to be a lot thinner than last year’s Moto Z Force. There is once again a lack of a headphone jack which may upset a lot of people. This year, Motorola seem to have opted for the dual camera just as everyone else is doing now.

There are very few differences in design to last year but considering that Moto Mods have to fit on we wouldn’t expect it to differ much if at all. We expect to see either the Moto Z2 or the Moto Z2 Force down here at some stage but do not expect to hear anything official until closer to the announcement date. With any luck Motorola will bring both of these to our shores.

Not that I listen to a lot of stuff with headphones on I would still sooner have a dedicated port than not. Would I be right in thinking that if they have removed it that the phone would also not have an FM tuner in it too?
I hope they have still have a headphone port in the Z2 and or X4 as I am interested in getting another Motorola as adapters/Bluetooth is not the same.

I hope they bring this and the Z2. That’s what in waiting for.