Google is back on schedule this week, dropping a new game and app to just 20c each on Google Play. This week Transparent clock weather Pro and Modern Combat 4: Zero Hour are reduced to just 20c each.

The information is pretty decent too, there’s the option for different weather providers, but there’s no option to use the Bureau of Meteorology so take it with a grain of salt. Instead you can use Foreca, Met.no, Weather Underground or Open Weather Map.

The app supplies information updates to the hourly, daily or weekly forecast in either15 min, 30 min, 1, 2, 4, 6, or 8 hour intervals. There’s a lot of different widgets you can display the information on, with different default sizes (2×1, 4×1, 4×2, 4×3 and 5×2) which can then be stretched out if your launcher allows it. The widgets range from basic to quite in-depth showing information such as current time,date, basic or advanced weather information, daily or hourly forecast, battery level, Internet connection status, available storage information, next alarm, next calendar event, week number, battery level and more.

No In-App Purhcases here, just a good looking weather app, and for 20c it may be worth a look. Head over to Google Play while the sale lasts. Modern Combat 4: Zero Hour is a decent first person shooter (FPS), with an interesting back story that should keep you engaged for hours. The story goes


In the wake of nuclear warfare, the only chance to avoid global devastation is in the hands of the few elite soldiers who must track down and rescue the world’s leaders from a frighteningly familiar terrorist group.

Gameloft claim ‘console quality graphics’ but as the game is a few years old now, it’s probably not quite up to the graphics in an Xbox One/PS4, but they are pretty decent.

Once you buy the game, you will find In-app Purchases valued between $2.99 – $159.99 per item, so be careful about getting too attached to this one.

It’s a decent game if you’re into FPS war games, so why not give it a shot. It’s just 20c for the next week on Google Play.

I’ve gone for an interesting camera app this week with Silent movie camera, Kamarada reduced to Free for a limited time.

The app turns your camera into a silent movie camera with filters and effects available to be used while recording. You can use either the front, rear or both cameras while recording with the flash able to be used when required. The movies record in 4:3 aspect ratio…just like an old-school film camera and when you play it back you can add a piano soundtrack from the library to give it that retro feel.

You can change the skin of the app to take it one step further, with a choice between a rustic wooden or stylish black leather face for the app. 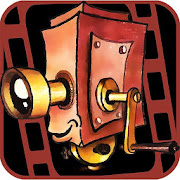