It’s here! It’s really here. Asus has advised that the long awaited Android Wear 2.0 update for the Zenwatch 3 is finally rolling out – and even better, someone has captured the OTA link if you want to sideload it. 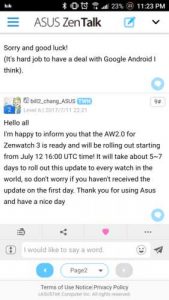 If 5-7 days is too long to wait however, you can, if you’re willing to sideload, apply the update now. reddit user k3vink3vin managed to capture the OTA link from his Zenwatch 3 and you can download it here.

While the Zenwatch 3 is now available, the wait is still on for owners of the Asus Zenwatch 2. Asus last week advised that the Zenwatch 2 would begin receiving the Android Wear 2.0 update in two waves, with the first wave starting some time this month, and the second wave starting at the end of July/beginning of August.

It’s good news for Zenwatch 3 owners though, so hopefully you get that Update available notification on your wrist today.

guess the crown will work for navigation