Home News and Editorial Australians getting unexpectedly slugged up to $20 million in the last six... Most people have either had it happen to them or knows someone it has happened to — the unexpected charge on your mobile bill. Today the Australian Communications Consumer Action Network (ACCAN) have released a study demonstrating just how prevalent it is with 12 percent of those surveyed experiencing unexpected third party charges on their mobile phone bills in the last six months.

ACCAN commissioned the survey which resulted in 2032 respondents between 5 – 18 April 2017. The survey results showed that “12 percent of respondents experienced an average charge of $12 in a 6 month period”. Extrapolating this figure to just the consumer base of Telstra, Vodafone and Optus (90 percent market share) means that nearly 1.9 million consumers received unexpected charges on their mobile bills. This equates to nearly 20 million dollars of unexpected charges in just six months.

These staggering results have resulted in ACCAN calling for better protections put in place so that consumers don’t fall for these unexpected charging mechanisms. Over a third of those surveyed had incurred unexpected charges that they “didn’t consent to or confirm the charge, or understand how or how much they would be charged.” 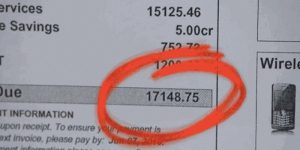 This significant lack of awareness indicates that there should be stronger consumer protections, such as default barring of third party charging, and better consumer information. If people want to charge items to their phone bill they should have to actively change their settings with their telco. Otherwise their phone is like an unsecured credit card, and people have no idea what they’re being charged for.

While there is the current safeguard of replying “STOP” to SMS notifications to opt out almost three quarters of respondents reported that they were still charged despite replying “STOP”.

Unfortunately the survey found that consumers were reluctant to complain to their telco due to their lack of confidence that the telco or the third party would help which is an indictment on all telcos. A quarter of those who experienced unexpected charges did not complain or dispute them with those charged under $5 unlikely to take further action. Very few took it even a step further and reported it to the Telecommunications Industry Ombudsman (TIO) (6 per cent).

ACCAN recommend that if you find these charges on your bill go the the third party first and if this does not help, your next step should be your telco asking them to bar these services. If the telco is no help then you should take your complaint to the TIO.

Here at Ausdroid we encourage consumers to take control and be careful what you bill to your mobile phone account and if anything unknown surfaces then you should always question it and keep questioning it until it is resolved to your satisfaction. There is a Mobile Premium Services Code that controls some third party charges. You can have your say on the code and comment on third party charges by making a submission before July 27 over at the commsalliance website.

I for one have been hit with unexpected charges several years ago after entering a competition related to a TV show and missed the fine print at the bottom of the screen and it took a long time to fix it so certainly welcome any extra safeguards that may be introduced.

Have you been hit with any unexpected charges? How did you resolve it?

Go into your settings for your mobile account and set Premium SMS spend limit to zero. For some reason my Optus account would not let me alter the spend limit but those helpful people on online chat on their web site fixed it for me. My wife was slugged about $20 before we could stop it – all from an innocuous survey on Facebook. We also removed our phone numbers from Facebook to stop any attempted repeats. Facebook are constantly nagging to put the numbers back but they have to be kidding when they enable this type of robbery.

OK so it’s not really the same thing.. but I’m still getting charged for phone insurance that I cancelled 8 months ago. Lucky I saved the chat log to my Google Drive.

that’s not great mate. Is it the telco giving you the run around or the third party? I’d be looking at the TIO if they dont resolve it soon for you.

This months bill i’ve actually been hit with “Content Service Charges” of 9 odd dollars. I haven’t used premium services and certainly didn’t agree to any. I complained to Optus who said I needed to dispute the transaction with the biller which is a random company i’ve never heard of. Im waiting with baited breath for this random company to give me a call. If optus don’t refund me the money I shall make a TIO complaint.

I wish i’d fought mine all those years ago but it was about 10 years ago and I didn’t know any better then. We may say oh its only a few dollars but if this company does it for 100k people at a few dollars a month they are making a fortune — at our expense.

good luck with optus. surely just mentioning the TIO will help push for a good resolution?