Home News and Editorial Bluetooth SIG announce Bluetooth Mesh, to join all the things together 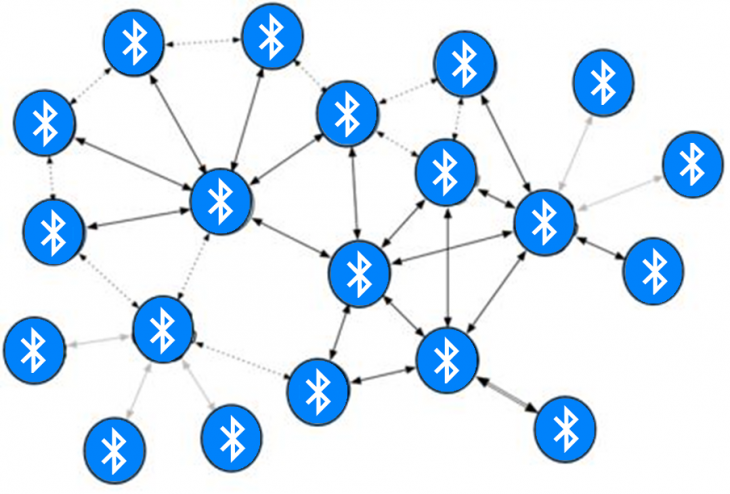 There’s a race going on in the tech world to be the thing that connects all the things using a low power protocol, the WiFi Alliance is developing the 802.11 ah standard, a Telecom consortium are working develop the 5G standard to include a low power protocol and today the Bluetooth SIG announced Bluetooth Mesh networking including Bluetooth Low Energy.

As with the more traditional mesh networking protocols like Zigbee and Z-Wave the idea of a Mesh network is that each element or node of network can be both a transmitter and a repeater for any signal. This allows a network to dynamically route, and if needed reroute, information throughout the network via any pathway that gets the signal to it’s detonation the most efficiently. As each “hop” is typically only a short distance the whole system can thus run on very low power.

Now you’re not going to be broadcasting Game of Thrones over Bluetooth Mesh; these types of protocols are more intended for command and control style traffic. The Bluetooth Mesh standard differs from the traditional Mesh in that not all nodes have to rebroadcast the signals. This means that some devices may only “dial home” at pre-programmed intervals allowing those devices to have insanely long battery life.

There is also encryption built into the base of the Bluetooth Mesh standard which is a very welcome addition given that security will be paramount for home automation and other IoT applications.

With the Internet of Things poised to become the next big thing both for consumers and industry there’s going to be a lot of competition in the lower energy networking space. Let’s hope this leads to better, more secure standards being developed and implemented.

Bluetooth is awful as it is. Do we really have faith in them making it more complex?