Home News and Editorial Google Home team gets a new head of UX with former Pebble,... The new hire was discovered by Variety magazine via Mr Damir’s LinkedIn profile, where he posted about his new position posting on the social networking site: 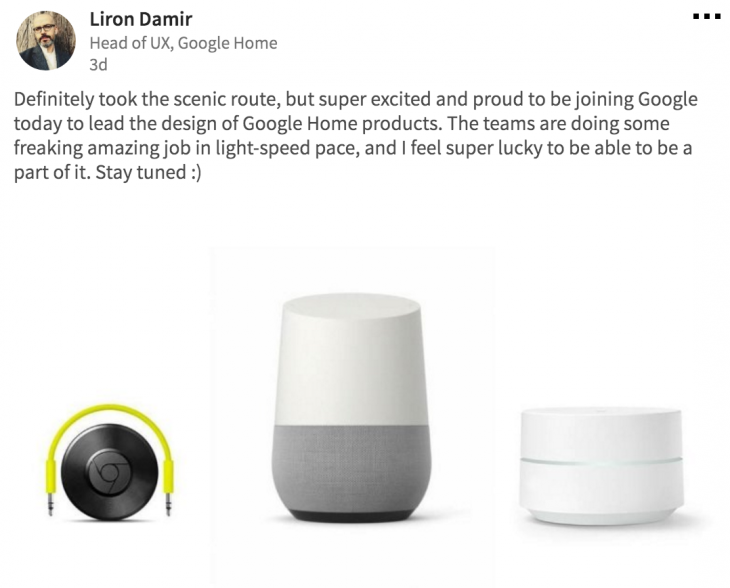 As is the the usual story, Google has confirmed Mr Damir’s hiring, but has not commented further.

The Google Home team currently looks after the Google Home business, as well as Google Wi-fi and the other jewel in Google’s crown: Chromecast, a product which notably has very little user interface, but has a spotty user experience feedback with some frustrations about dropouts of the service.

Mr Damir’s job history lists his previous stints as a Director of Design for webOS at Hewlett Packard after Palm was purchased by the company back in 2010. Mr Damir then followed the webOS business when it was purchased by LG in 2013 before heading to Pebble to be Head of Design and then VP of Design at smartwatch maker Pebble before joining Essential earlier this year.

Google Home is currently expanding rapidly in availability, most reaching launching alongside Google Wi-Fi here in Australia. The integration of Google Assistant in both Google Home and Chromecast is expanding as well, with Google announcing new Assistant integration on Android TV and Chromecast at Google I/O back in May. Mr Damir’s role in developing positive future user experiences for Google Home products will be invaluable in any rollouts or improvements.