Just like with the first LG flagship this year the leaks are flying thick and fast for their second flagship, the V30. We have seen the camera details leak along with the display type and the presence of wireless charging but now we have seen leaks revealing a lot more.

A leaker on Twitter, @Universeice, with some pedigree of accuracy of previous leaks, has tonight tweeted out when they say is an official render of the LG V30, along with side by side comparisons with the LG G6 and the Samsung Galaxy S8. The render looks like a cross between a Galaxy S8 and an LG G6 and it does seem to match up with the user manual image we saw leak just yesterday. 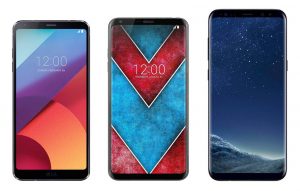 The extra details of the V30 were actually leaked by LG themselves in a press release they sent out discussing their new display which will feature on their “next flagship” – most likely the V30. The display will be a plastic OLED (P-OLED) which is meant to be stronger than glass (no doubt similar to the display type in the Moto Z2 Force). The P-OLED display will also feature a Gorilla Glass 5 coat.

The V30 display will be a 6 inch display with an 18:9 display ratio with curved edges, just as what appears to be the case in the render above. The upper and lower bezels have been reduced even further than for the LG G6 which is an impressive engineering feat. To achieve this, as seen in the render above, the LG logo is no longer on the front of the display as it was for the G6. The new display will feature a 1440 x 2880 pixel resolution along with power-saving technology for the display.

LG have also provided an image with the press release:

These features listed by LG themselves make for a very tasty device and seem to match up perfectly with the render that has leaked today, so much so that a suspicious mind may suspect that someone may just have created the render based on this information from LG.

What do you think? Are you looking forward to seeing what LG bring to the table with the V30? Could this be your next?

I like the look of this phone but I don’t like 18:9 ratio. You get less screen real estate compared to a 16:9 ratio. For example the Nexus 6P has the same diagonal screen of 5.7″ Yet the Nexus 6P screen area is over 6% bigger due to having a wider aspect. This means in portrait mode, the LG G6 has under 65mm screen width and the Nexus 6P has 71mm width, this makes your screen keyboard noticeably wider on the Nexus 6P. Also when reading an article in landscape you’ll see more lines of the article. Finally, when my… Read more »

I just replaced my dying 6P with a LG G6.

I much prefer the taller ratio, but to each their own

I guess the Pixel 2 display will look something like this. I’m hoping it’s not curved at the edges though. I prefer the traditional flat design with small bezels.

Looks like a Moto Series for me. But, very excited to see this one to release.

After using a phone with 18:9 (2:1) ratio and small bezels for some time now, I don’t think I’ll ever go back to the traditional 16:9. As for the rumoured curved screen, not so much.

i only used the G6 for a month or so but i feel the same (although the software on it sent me back to my Pixel XL. Once you use the 2:1 ratio display its hard to imaging even being perfectly happy with a phone that doesnt have one

But after a few weeks it won’t matter. UX is everything and this obsession with shrinking the bezels won’t result in us being any more satisfied with our phones in the long term. Once we have zero bezel phones, then what?

The sort of innovation that excites me will always be for function, not form.

The looks and design is where it needs to start. Otherwise it wont get a look in anywhere but that is a good point re the function. What were you thinking?

Yeah don’t get me wrong. Good hardware design is important. It’s just not the MOST important thing. I know that in my day to day usage the hardware always disappears and the user experience is what ends up coming to the forefront.

I think I’m most excited about AI/voice assistance, AR/VR, camera/imaging improvements, and new services that make our lives easier (what these will be I don’t know… smarter people than me are working on our futures!).