After leaking through the FCC, the Samsung Gear Fit 2 Pro has leaked essentially in full this time with Evan Blass (@evleaks) spilling the beans on the upcoming fitness band which will launch at the upcoming Note 8 launch on August 23rd.

If you’re not a swimmer, then the built-in GPS functionality will record your tracks whether you’re out for a walk, run, ride or something else.

Whether it’s swimming, running or riding you need your tunes while exercising and Samsung has apparently worked with Spotify to include offline support for Spotify Tracks. You’ll definitely need an upgrade to your bluetooth headset if you want to use it in the pool though.

With the launch of the Gear Fit 2 Pro, Samsung has also re-designed the clasp, moving from the familiar fitness band style to a more traditional watch band style clasp. This should ensure it’s a little more secure while out exercising. 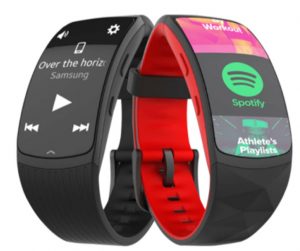 We’ll get more information on availability of the Gear Fit 2 Pro, but the appearance on the Samsung Australia support website recently says we’ve got a good chance of seeing the new wearable down under, the only question is how much it will be.

Definitely a case of buyer beware with the Spotify functionality. Managed to get it on my Gear Fit 2, but had to use a VPN to do it as its only available in the US

Funny, they said that Spotify app was coming to the gear s3 aswell, and I’m still waiting