LG’s V30 has been leaked for quite a while now, and finally this evening the company has officially unveiled their new flagship – and it sure packs a punch.

The phone’s metallic body maximises the screen-to-body ratio, with it having a 6-inch display but still being 8mm shorter and 3mm thinner than last year’s V20. It is just 7.3mm thin and weighs 158 grams. Not surprisingly, the phone looks exactly the same as we posted earlier today with the fingerprint sensor on the back and bezels kept to a minimum.

The device is covered by Gorilla Glass 5 on the front and the back, curved all the way around to give the device a “sleek and integrated look and feel”.

Speaking of the display; it is a large 6 inch OLED FullVision display with a display ratio of 18:9 in keeping with the G6 of earlier this year. Its resolution is 2880 x 1440 pixels (QHD+) and LG promises it will have an extremely rapid response time. 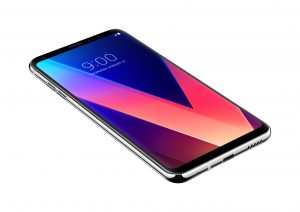 The rear camera features a dual-lens system with a very minimal camera bump. The 16MP standard angle f/1.6 lens allows more light to reach the sensor, producing “brighter, more dynamic shots”. The Crystal Clear lens helps to deliver more accurate colours and clearer images than the plastic lens that most manufacturers use. The second sensor is a 13MP wide-angled lens with an f/1.9 aperture. There is optical image stabilisation, electronic image stabilisation (done in software) and a Hybrid Auto Focus that uses both Laser and Phase Detection auto-focus.

The front camera is just 5MP, but also features a wide-angle lens.

As rumoured, the LG V30 packs a Quad DAC and an included set of earphonesm, all tuned by engineers from B&O Play. There are four pre-programmed presets to enable to user to produce professional-quality sound to their liking.

LG also included MQA (Master Quality Authenticated) technology that allows the user to stream high quality audio by folding the file into a smaller one without a loss in quality.

Not only does the V30 include Google Assistant out of the box, it will also feature unique commands such as “Okay Google, take a romantic Cine Video” and “Ok Google, take a wide angle selfie”. Upon hearing these commands, the phone will not only open the correct app but also adjust the settings so that the command is carried out precisely as requested.

The V30 is powered by a Qualcomm Snapdragon 835, is IP68 water and dust resistant, and has both wireless charging and Quick Charge 3.0. Unfortunately the device will be running Android 7.1.2 Nougat out of the box, but with Oreo only just dropping into AOSP this week that’s to be expected. We expect the phone to be upgraded to Android 8.0 not long after release.

If you want to pick up a V30, it’ll launch in South Korea on September 21 and will be followed by key markets in North America, Asia, Europe, Africa and the Middle East.

The V30 with 64GB storage will come in four colours: Aurora Black, Cloud Silver, Moroccan Blue and Lavender Violet 2 (we told you someone would think up cooler names than black, white, blue and pink) while an apparent upgraded model, the LG V30+, will ship with 128GB of storage and will be available in some markets.

We’re waiting to hear about Australian availability for the phone. LG Australia tells us:

LG Australia is excited at the expansion of the LG V series, with the global announcement of the LG V30 smartphone at IFA in Berlin. The LG V30 is further evidence of the LG commitment to develop smartphones with diverse capabilities that cater to the varying needs of consumers. Information about the release of the LG V30 in the Australian market will be shared as soon as it becomes available.

We will of course furnish you all the Australian local information as soon as it comes to hand.

There is very little in the announcement that we did not already know, but this doesn’t make the LG V30 any less impressive. We’re looking forward to getting our hands on this one.

Are you impressed with LG’s latest offering? Will you consider this as your next phone? Tell us in the comments!

It should be mentioned that the official LG V30 youtube promotional video is set in Sydney, featuring many landmarks and multiple handsets in everyone’s hands. https://www.youtube.com/watch?v=AHGIBaLuENM

Considering how slow the V20 sold down here, its availability a was only at JB and on top of that how quickly JB slashed the priced does not bode well for getting the V30 in Oz.

Hope I’m wrong and will eat my shorts if I am.

I think the phone itself looks great with lots of features but I’m not sure about that 3300mAH battery. If only the increased it to 3500mAh or above they may have stolen some more potential Note 8 buyers.

The only hurdle left for them to fall at is the price.

you wonder whether cutting the price for one single flagship generation would help them get into the mindset of people more for future devices? Short term pain for long term gain?

Every time LG gets mentioned, the next statement is about bootloops. If they are to get a place back in the limelight they need to break that – and with Samsung going off into even sillier land with the Note 8 prices, being more realistic with the price is the most open avenue.

Otherwise all that happens is they hit the same lower prices, by being forced down over the course of 4-6months as it doesn’t sell.

haha. me too. Surely it’ll be the same as the G6 when it was released? That is pure speculation by me though. We are yet to get actual prices at this stage

I’m not sure how much the G6 was at release. I dearly hope it’s sub $1000 AUD but probably unlikely these days.