At IFA, Ricoh has unveiled their latest 360-degree camera in the Theta line, announcing their Theta V – the first Street View ready 360-camera.

The Ricoh Theta V has some decent updates on previous models, introducing 4K video capture and spatial audio recording, as well as an option to live stream from the camera. It’s also had an update to a new high-speed wireless radio making for faster data transfers, which Ricoh claim is up to 2.5 times faster.

For our money though, the key feature is this is the first Street View ready camera to be certified by Google as part of their initiative they launched in May. 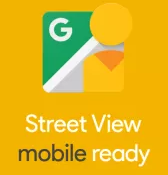 The Theta V camera can capture 14MP still shots in addition to 4K video capture, and they’ve bumped up the internal storage to 19GB.

We’ve asked the Australian distributor about availability here in Australia and will update with any new information.