IFA has had a lot of innovative products this year and tonight it continued with Huawei announcing the first mobile chipset to contain dedicated AI hardware. At the same time they announced that it would be arriving first on Mate 10 in 6 short weeks time. Their social media team took to Twitter to share the news with everyone and in the process appear to have outed the Mate 10.

In a tweet following their introduction to the Kirin 970 and the AI tech it houses Huawei Mobile firstly announced that the Kirin 970 will feature in the upcoming Mate 10.

They followed this up with a video that summed up the entire presentation of the chip’s power and it’s AI capabilities. Smack bang in the middle of the video there is an image of a phone with what appears to be a massive 18:9 display and the device with the smallest bezels ever seen on a Huawei phone. With the Kirin expect to arrive first on the Mate 10 which is rumoured to have all of these features it is a fair bet that this is a glimpse of what will be announced on October 16– although the shape of the 2 doesn’t quite match (did they squash it down to fit it into video better?).

We at #Huawei believe people want a device that can understand and predict their needs in an innately human way. #Kirin970 #HuaweiMobileAI pic.twitter.com/LU6WGBG7hn 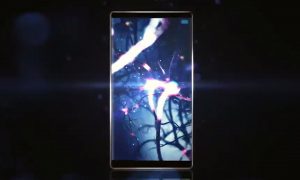 The Mate 10 is promising to be Huawei’s best ever phone with a massive 18:9 display with barely any bezels, along with the new Kirin 970 and the new AI capabilities that brings with it as well as a full point upgrade to EMUI bringing it to 6.0. I cannot wait to get my hands on a Mate 10 or a Mate 10 Pro and see what Huawei are bringing to the fight this year. One thing for sure Huawei are definitely excited about it like they have never been before. Are you?