Home Mobiles Xiaomi announces their first Android One handset, the Mi A1 At their event in India this afternoon, Chinese electronics maker Xiaomi has unveiled their first Android One handset, a more premium experience for the Android One platform.

The hardware looks very much like a Xiaomi phone, a familiar design in an all metal Aluminium body that’s just 7mm thin and weighs just 165 grams. The phone will be available in three colours – Black, Gold and Rose Gold, and is designed with fingerprint resistance in mind, with the Black version coming with anti-fingerprint coating. The phone also has a fingerprint sensor on the rear for added security. 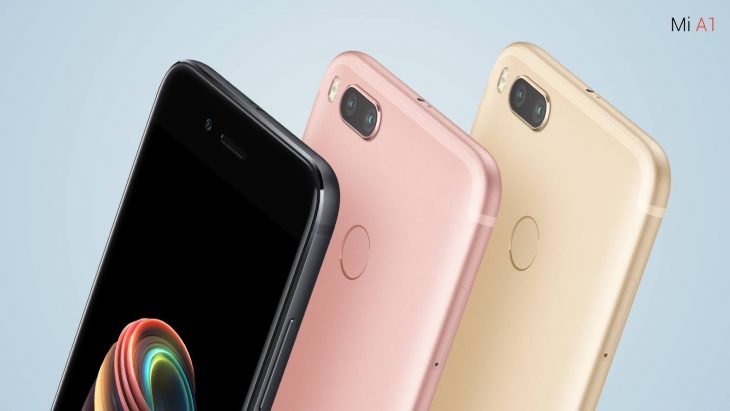 The Mi A1 has a 5.5″ FullHD (1920×1080) resolution display with 2.5D curved Gorilla Glass on top, and is powered by a Snapdragon 625 processor with 4GB of RAM and 64GB of storage. The phone includes an IR port which should be good for people wanting that spec which has disappeared from most flagships in the Western markets. Xiaomi is taking the camera seriously on the Mi A1. A dual-camera setup on the rear includes two 12MP cameras, with one of them wide-angle, and the other telephoto which will give you 2x Optical, and 10x Digital zoom when taking shots. The sensors are large – 1.25um pixels – allowing for 56% increased light intake by each pixel. The dual-camera setup allows for stereoscopic imaging and deep learning algorithm or basically: bokeh effects. The Mi A1 is a more premium device for the Android One market, a change in direction acknowledged by Jon Gold, Global Director of Android Partner Programs who said ‘Android One is no longer aimed at the entry level. From now on, Android One will be available on a broad range of devices and price points.’

The Mi A1 will be up to date and secure thanks to Google delivering timely, monthly security updates as well as treat updates with the Xiaomi Mi A1 in line to be one of the first devices to get Android Oreo, as well as Android P when it’s released. Android One with its stock software will include Google Play Protect, meaning Google can protect you from more.

It’s not all stock though, with Donovan Sung, Director of Product Management and Marketing of Xiaomi Global saying that the Mi A1 will also include Xiaomi’s Camera software baked in to allow for all the improvements that they’ve developed, including Beauty Mode, Portrait and smart beauty modes.

Mi A1 will be available in India on Mi.com and Flipkart from midday on September 12h for ₹14999INR (around $294AUD). They will be making it available elsewhere at a range of offline retailers from September 12th as well. They will be bringing the Mi A1 to a number of different countries – but Australia isn’t one of them. You will be able to buy the Mi A1 from these countries in the future: Even though it will technically be unavailable in Australia, will Flipkart ship to Australia?

No, But places like 91Mobiles in Singapore/Hong Kong etc will. I’m watching them to see who gets it and for how much.

Thanks Daniel, also someone pointed out to me on the Whirlpool forums that banggood and geekbuying are advertising the phone. $310.24 Australian on geekbuying with free postage 15-30 days shipping. $9.60 extra gets you 3-5 days shipping with DHL

Nice one. Thanks Lee

The evolution of the Nexus line.

So close to what I want. A bit large, and missing LTE band 28. The search continues.

Hoping this will be available someday all over the world. It would be best for other countries to have it too.

No NFC seems like a huge omission to me. I’d much prefer loosing the ir blaster for NFC.

I haven’t used it yet (that I can remember) – can you tell me something about its use to you. By that I don’t mean “what app do you use” but rather how much convenience does it add and how ?
besides that I could really go for this phone