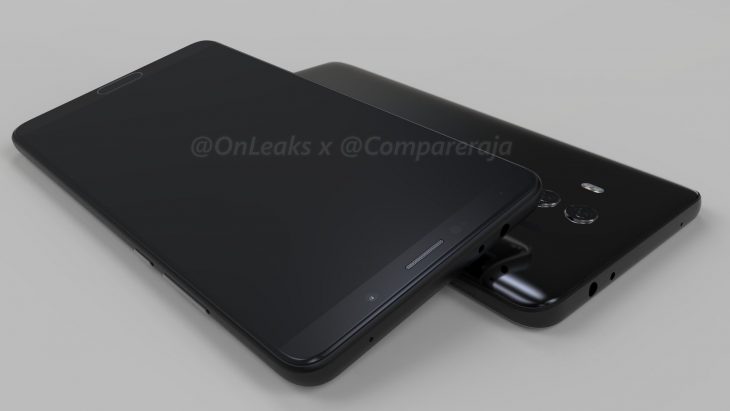 Huawei have made the big time. We know this because the leaks keep coming and who leaks phones no one cares about? Last weekend at IFA we saw Huawei announce their innovative new Kirin 970 chipset that houses its own AI hardware followed by the announcement that (unsurprisingly) it would be arriving with the Mate 10, slated for an October 16 announcement.

Today 3D renders have leaked demonstrating what is apparently the Huawei Mate 10. The leak is courtesy of leaker @OnLeaks and Compareraja website. Steve Hemmerstoffer, also known as @OnLeaks has a great track record for accuracy lately, we’re pretty happy to accept this render as the real deal. The renders are “factory CAD-based renders” used by manufacturers to design accessories like cases which @onleaks has used previously for leaks such as this.

Looking closely at them all we can take several things from these renders.

There is a front mounted fingerprint sensor which was only on the Mate 9 Pro last year. Last year the Pro had a curved display to go along with the fingerprint sensor on the front — two differentiating features from the standard Mate 9. This makes us wonder what the differentiating factors will be this year, and yes strong rumours suggest we will be seeing both versions here this year with the standard version priced around the $1000 and the Pro positioned to go up against the Note 8 and the Pixel XL 2. The fingerprint sensor is placed on a very small looking bezel which sits below what does NOT look to be an 18:9 ratio display.

Also of note is the presence of a headphone jack next to the IR blaster. It is a sad state of affairs that we have to noticed this but unfortunately the writing is on the wall — one day we will wake up and no phones will have it and we will most likely not care one iota.

Anyway, back to the Mate 10. It does not appear to be an overly thin device, hopefully meaning it packs a massive battery inside. There is also obviously a dual camera which Huawei have been doing for a while and we expect it to be more of the same with Huawei’s Leica partnership leading to some great shots. There is also what appears to be a single bottom firing speaker which is disappointing but with so much to fit inside phones these days it is rare that companies include stereo speakers.

With the Mate 10 not being announced for another five weeks we expect to see a lot more details of it leak between now and then. We will of course keep you informed of any rumours or leaks that pass across our desk.

We don’t have long to wait though, with Huawei expected to announce the Mate 10/Mate 10 Pro at an event in Munich on October 16th.

One thing I am hoping to see is an under-glass fingerprint sensor on the Pro and possibly a curved display (curved like the LG V30, not any of the Samsungs). What about you? What will make you part with your hard earned on the Mate 10 (Pro or standard)?