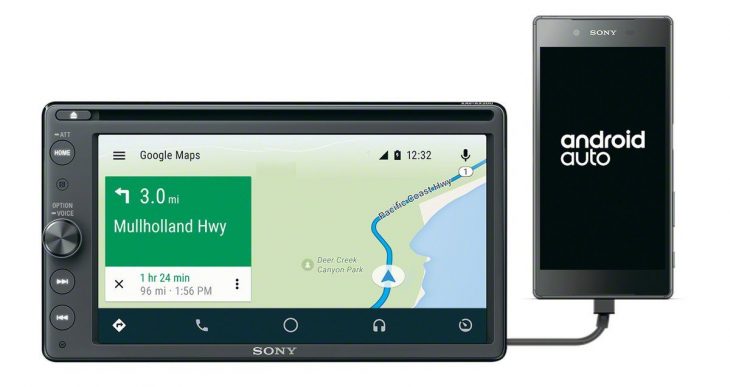 Android Auto has been around a while now but the uptake of aftermarket headunits hasn’t been great. They are all very similar in features and car manufactures are making it more and more difficult to replace their factory systems. Sony are hoping to stand out with their new in-car receiver announced today.

The new XAV-AX200 receiver supports both Android Auto and Apple CarPlay but has several new features over their previous models.

The new receiver has a DVD player now (because we all use DVDs in 2017?) as well as the inputs for three cameras. The high voltage pre-out of 4 volts apparently gives a clearer sound with less distortion.

The real advantage it has is in the sound it can deliver. It has a built-in 4-channel amplifier that delivers 55 watts x 4 and 20 watts x 4 (RMS at 4 ohms) output power. It also has Sony’s “Extra Bass” to help overcome noise from the engine and produce clear sound at any volume level. There are some software tweaks to the sound management with a “Dynamic Stage Organiser” with a 10-band equaliser along with presets to guide you to create the sound you want. The XAV-AX200 is also FLAC compatible through the USB terminal for that high quality sound.

Topping it all off is a 6.4 inch touch screen featuring “lighter touch” operation. 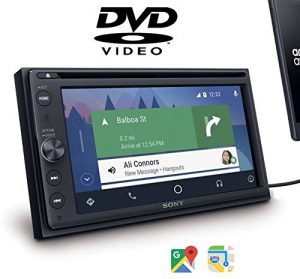 While the addition of a DVD may well be a throwback to a bygone era the improvement in sound hardware and software is something that many users will love, crave and go searching for. The XAV-AX200 will be available in Australia in November with pricing yet to be announced — FWIW, in Europe it is priced at 549€.

Hands up those who have an aftermarket Android Auto head unit (me). How about those who are considering it? Would you consider this one or do you have your eye on something else?

It is a really good news. Cannot wait to see what Sony has for people

I’m currently in the market for a new Android Auto head-unit after owning both Kenwood and Sony Units, I still find the Pioneer units work the most seamless. I have had connection drop outs and general instability on the Sony XAV-AX100 and Kenwood 917WS. Currently I am using the 4200NEX with an LG G6 and it works seamlessly. The new Pioneer head units have interested me, as they have inbuilt Microphones that work much better for Google Hotword Integration (as voice should be a core part of Android Auto). They work well to block vehicle noise and the interface loads… Read more »

I know it’s probably due to safety reasons but do you think Android Auto head units will ever support YouTube (audio only) for podcasts such as All About Android or even old episodes of the Ausdroid video Podcast? Also same for Google Play movies? That’s one of the major reasons I wouldn’t buy a head unit over a Android tablet that I can install a Third party app like Automate which supports YouTube, GP Movies etc

I listen to All About Android and the Ausdroid podcast through pocket-casts on Android Auto; the integration is fantastic. In terms of videos, VLC works on Android Auto and only plays Audio as desired. You’re never going to get official Google support for Youtube or Play Movies for Audio only. Alternatives include AnyAutoAudio which passes any audio (played on your phone) through to Android Auto. XDA Labs has several other 3rd party (unsupported) apps for Android Auto too, not supplied through the Play Store. If you really want video you can just use the inbuilt video player built into the… Read more »

Agreed, I picked up and installed one last week for only $535 including a reverse camera from Frankie’s Auto Online. Enter coupon code YOUCANDOIT during checkout to receive 5% off