The Huawei Mate 10 is not being announced until October 16 but already the sheer volume of leaks surrounding it has us so very confused. Today we have seen yet more leaks surrounding the included display that may confirm some questions.

We already know that all Mate 10 variants, of which there are three, will come housing the all new Kirin 970 chipset. From earlier leaks we “know” that the display ration will differ depending on the model. The Mate 10 Pro, or the Blanc, will apparently feature an 18:9 aspect display ratio with its 5.99 inch 2,880×1,440 pixel resolution but the standard Mate 10 (Alps) will arrive with a 16:9 aspect ratio display with a 2,560×1,440 pixel resolution. Yes there is another model coming be it is unclear as to the specs of that one.

Today’s leaks show yet another front panel of what appears to be the Mate 10 Pro. The front panel most definitely looks to be an 18:9 aspect ratio display with no evidence of a fingerprint anywhere on the front of the device. The writing on the panel also says MT10 which surely must confirm it (/s) but it does look to be taken at a place where repairs and parts are purchased. 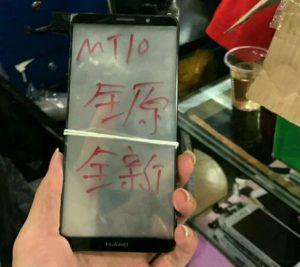 The second leak is courtesy of Huawei via PocketNow. Pocketnow received the video from Huawei that shows the Mate 10 Pro having an, as expected, 18:9 display ratio, although the resolution of the said images/video was just 1080 x 2160. This is different from the QHD+ display expected but the images were possibly downscaled to allow a much smaller video to be created.

The video, not only gives away the display ratio but shows how the new EMUI 6 will feature the ability for the phone to intelligently change the colour of on-screen text to complement the surrounding colours (eg. wallpapers) called Smart Colour. This is a nice addition but of course for us it is all about the specs. The display ratio is great but a QHD+ would be better. Could this possibly the rumoured third version — a Mate 10 Lite with a HD+ resolution with a 18:9 display ratio?

While it is nice to see some of these leaks they are no doubt starting to confuse some, especially me. Hopefully we will have it all cleared up soon but I suspect Huawei are playing this exactly how they want to and we will find out the final details when they want us to.

Anyone interested in the Mate 10 or the Mate 10 Pro? Both will most likely be arriving down here this year so keep an eye out for them.

I will be buying this phone outright on the Telstra Network. Time to retire the Samsung Note 3. Anyone know a outlet where exactly to buy this phone when it comes out???

Hi Scott,
I’m waiting to buy the new Pixel2 XL but I might be persuaded by the Mate10 Pro. What are Huawei like for Android version updates and security patches for unlocked devices? That’s a critical issue for me.
Cheers

that is a very good question. I’d like to say they are good but tbh I’m yet to see significant updates to any Huawei phone I have used. The P9 is still on M here in Australia even though Nougat rolled out overseas for it a while back.

I posed the question to Huawei a few weeks ago regarding their update policies but they are yet to get back to me. They are chasing it up with their head office in China.