Home News and Editorial New billboard suggests Google are set to unveil the next gen Pixel... A few weeks ago we reported that Google were possibly announcing the Google Pixel 2 devices on October 5. Today a billboard has been spotted suggesting otherwise.

A reader over at Droid Life sent them a picture of a billboard in downtown Boston suggesting that Google’s event is actually on the 4th of October and not the 5th. The billboard gives very little away but does tell us three things — it’s date is the 4th of October, the topic is phones and the speaker is Google. Putting two and two together it is a fair assumption that the 4th is the date where Google will announce the new Pixel phones along with possibly some Google Assistant updates (“Ask more of your phone”). 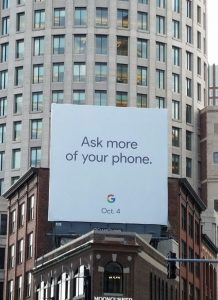 There are also strong rumours that Google will not only announce the two new Google Pixel phones but also a new Pixel Chromebook and a set of Google Assistant earphones. While these rumours are strong they still should be taken with a grain of salt at this stage — remember Andromeda last year?

Whatever Google announce you can be certain that there will be a few of us here at Ausdroid getting up bright and early to take it all in and report to you as it happens. Lock it into Ausdroid first thing in the morning on the 5th (Australian time — so yes Evan Blass is technically correct, it will be 5th October somewhere when the announcement is made) to find about every single one of Google’s new announcements as well as any local information we have at hand.

I do wonder if the focus of this will be on auxiliary services, tied to the pixels and not made available to others. We saw that with photos, we know lens is coming, and there’s scope in google’s AI work to do more useful things.

It’s pretty certain that the hardware isn’t going to excite, so either the software takes up the slack, or the price drops significantly.