Home News and Editorial Reviews Anki Overdrive: Fast and Furious is slot cars for the kids of... 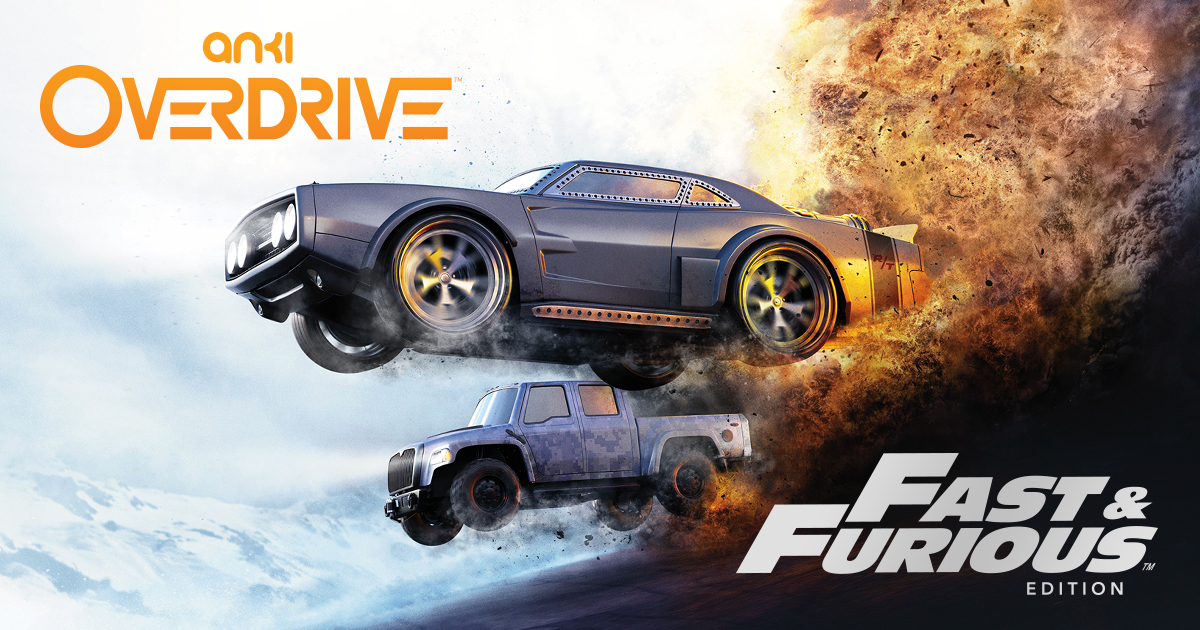 First up, I have to say that the Fast and the Furious franchise is lost on me. I vaguely recall watching the first installment, and none of the half dozen or so that have come since, and that’ll probably stay the case. However, their tie-in with Anki got me paying attention, especially as its Anki Overdrive we’re talking about. If you’re looking for a slot-car set in 2017, well, this is a slot car set on steroids, and there’s fair chance your kids will love it.

Anki Overdrive (both the unbranded and Fast and Furious Edition) is a mobile-controlled game that you can play in the real world, very similar to the slot-car racing games you probably played as a kid (if you’re my age).

There are, of course, a few differences. First, this is faster to set up. The tracks click together with magnets, and you can race more than two cars. You don’t need to use wired controllers either; you just grab a compatible mobile device (both Apples and Androids are supported), and you can take control of your car and race to your heart’s content.

In the Anki Overdrive: Fast and Furious set, users will find two cars — Dom’s Ice Charger and Hobbs’ MXT — as well as a variety of track pieces with which you can make a few track designs. There’s add-on track sets too, allowing you to create jumps, extra turns and more. You can quite easily build quite a large set to keep your kids (and the young at heart) entertained.

Setup is quick. Probably the slowest part is installing the app on your phone, while setting up the track will take mere seconds, and charging the cars (even from completely flat) will only take a few minutes.

Probably the only downside is that it isn’t exactly cheap, but considering the various layers of interactivity – raw racing, power-ups, in game stories, etc – it’s not a bad investment if your kids like cars and a bit of competition.

Once you’ve got the app installed, you can either build your own track straight up, or walk through a tutorial which will prompt you to create a fairly simple track to get started with. There’s no ‘lanes’ as such from slot-car sets of yore, rather the cars can change lanes, take racing lines on the inside of curves, and cut each over off on the straights. It’s actually quite a lot of fun.

The magnetic snap-together nature of the track makes it very easy to change the track layout after each race, though it will take a minute or so for the cars to quickly nip around the track to ‘scan’ any changes you’ve made.

I’ve had a couple of afternoons playing with Anki Overdrive, and my son and I had a ball, and even my daughter (almost one) got in on the action, laughing hysterically at these little cars racing around the bedroom.

There’s a few gameplay modes, but we spent most of our time in free-play, allowing simple racing against the computer (or each other) around tracks that you build however you like. There’s also tournament modes, races, time trials and more. 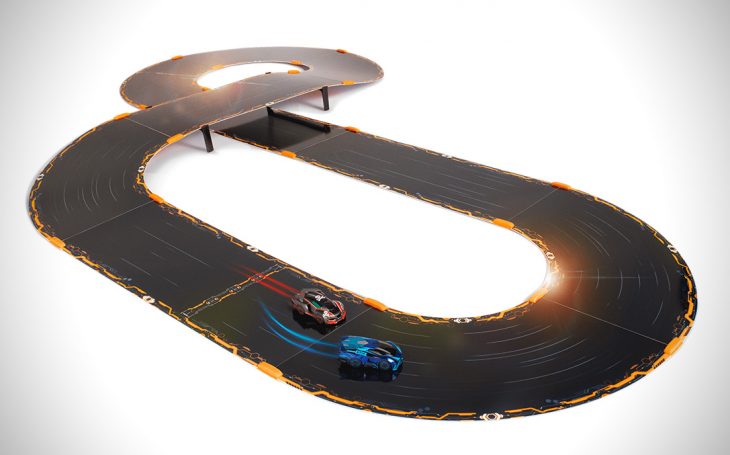 Battle mode is something you’ll want to get into with older players (who can understand a bit more about different levels of interaction), where you can score points by “shooting” your opponents, and you can use various power-ups and bonus features to advance your gameplay.

Control is fairly simple; an accelerator on the left is used to speed up or slow down your car (or you can hit the brakes if you really want), and you simply tilt the mobile device left or right to change lanes accordingly. It’s not instantaneously responsive, but it is pretty quick, so some solid reflexes will help you win.

Driving is friendly for young and older players; tilting your device only pushes the cars to change lanes. You can’t drive off the track, or turn around and race the wrong way, though if you drive fast enough — and neglect to put on the barriers on the corner pieces — you MAY find that your cars will sometimes leave the track, just like a slot-car set. Simply grab it and drop it back on the track and it’ll figure out what’s what, and keep going.

If you want to get a bit more adventurous, there’s track expansion packs which include extra straight pieces, extra curves, a launch kit for some jumps, or you can combine all of these and more to make truly spectacular track layouts. Really the only downside is the cost; if your kids have the attention span of a gnat, this might be an expensive toy that really doesn’t hold their attention for too long. Like any toy, its appeal will only last so long, but the story mode, tournament racing, and the dynamics between players will mean that — especially if you’ve got more than one kid to play against (or against each other) — there’s a bit of longevity to be found.

At $299, there’s cheaper ways to entertain yourself or your kids, but the unique features including different layouts, no fixed lanes, battle modes and more mean that this could be a bit of fun. Add-on kits start at $19.95 (for a banked track kit), to $34.95 for some extra track sets, up to $55 or so for launch kits, collision kits (cross-over track pieces basically) and more.

Both JB HiFi and Australian Geographic stores have Anki Overdrive gear available for purchase, though the Fast and the Furious set is a JB Exclusive.

Thanks for your post! I think there are many other people who are interested in them just like me! How long does it take to complete this article? I have read through other blogs, but they are cumbersome and confusing. I hope you continue to have such quality articles to share!
slither io

Very good, I think I found the knowledge I needed. I will see and refer some information in your post. thank you.

Thanks for the site is the very generate the game gta game is very good keys play the game.

The information you share is very useful. It is closely related to my work and has helped me grow. Thank you!

Like the style of these cars. Kids will really enjoy having this.