The countdown is on. This Thursday (Australian time) Google will reveal their next generation Pixel phones (as well as a few other tech goodies it is rumoured) and yet the leaks keep on coming.

A Redditor has claimed that a “reliable source” has reached out to him/her with some Pixel information. Android Authority is also reporting some very similar information has been revealed to them. While obviously this cannot be validated one way or another it is interesting and mouthwatering nonetheless.

Both phones will come in three colours: Kinda Blue, Clearly White and Just Black. Sounds like Google is trolling us with these names but maybe they are trolling the other manufacturers and their silly names for basic colours.

Gone is the 32GB onboard storage variant with both phones now coming in 64GB and 128GB. Finally some common sense from Google. 32GB is nowhere near enough for a majority of people, especially if you install a few games.

Both phones will run the Snapdragon 835 as expected and have IP67 dust and water resistance certification. They are both expected to come with an eSIM “slot” and how this works in Australia remains to be seen but we hope there are no hindrances to as many people as possible being able to use a new Pixel.

Both Pixel phones will come with exactly the same camera, a rear 12MP, 1.4 micropixels at f/1.8 with OIS AND EIS included for both front AND rear cameras. Both Pixels will house Google’s “Imaging Chip” which is apparently some form of image signal processor. Both models have the same sensors too. This is interesting given the front aperture on the Pixel 2, according to screen protector leaks is much bigger than on the Pixel XL 2. Time will tell.

As seen in the screen protector leaks, both models with have dual front-firing stereo speakers. Hallelujah I say. The displays will be protected by Gorilla Glass 5.

The Pixel 2 (also known as the lesser second gen Pixel) will have a 5 inch 1080P AMOLED display and a 2700mAh battery — seems a bit small but with a phone that small it may have been too much of a stretch to put a bigger battery in. It will retain the massive bezels of this years Pixel.

The Pixel XL 2 will have the expected 6 inch 1440 plastic OLED display (POLED) with Wide Colour Gamut and a decent 3520mAh battery. Google will no doubt have optimised it to not only run blazingly fast but last at least a full day. The body-to-screen ratio will be around 80-85%. 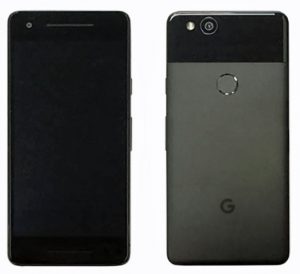 In what is a disappointment to many people, both Pixel phones will NOT have a headphone jack and not every region where the Pixels are sold will receive a pair of USB-C headphones in the box. The fingerprint sensors are still located on the back but are apparently new technology, improving them even more.

A big feature and one that sounds great to me is that Pixel purchasers will receive unlimited Google Drive space for 5 years! This is a massive saving over time, and if it continues all you have to do is buy a new Pixel every 5 years to keep that unlimited space.

WOW! All these new leaks, some of them new, some old but only suspected. As with all rumours take them with a grain of salt but they do not seem to be too far fetched.

Stay tuned to Ausdroid for all the latest on the Pixel devices as they are launched. We will have Jason on the ground in San Francisco feeding us all the bits and pieces and hands on experiences as soon as they are available.

Who here is going to buy a second generation Pixel? Which one?

I’m sad that the smaller Pixel 2 seems a lot inferior… The giant bezels on top and bottom look silly.

yes it’s a strange decision to fragment them so much. will anyone bother with the lesser pixel now?

This no headphone jack is a let down in my honest opinion. I got two nice pairs of headphones that I use all the time, specially my everyday commuting buddy, Bose QC 25. If I decide to upgrade my Pixel XL to the new model I will need to fork out another $500 on the new Bose QC35 II.

You could grab a little Bluetooth 3.5mm adaptor so you can continue to use the Bose QC25s, probably wouldn’t cost a great deal and certainly less than a completely new set of headphones

I’m currently using a Pixel XL but I think I’ll be buying an LG V30 this year. I don’t mind what they’ve done with their ‘skin’ and the hardware seems to be better than the Pixel 2 so far, especially considering the 3.5mm jack

One might assume Telstra is a given, but I’d hope to see them on more carriers this year.

I’m not sure what it is, but the more leaks I read about, the more I’m put off the new Pixel, can’t quite put my finger on it. I so wanted this phone to be the one, as I’m ready to upgrade, now I’m not sure. Will just wait for the official release and hope that does it for me.

there doesn’t really seem to be anything in it to make it stand out from the crowd does there?

Keen on a new Pixel but not sure which one.

No headphone jack = no buy

I can’t remember the last time I connected anything to the headphone jack on my phones… it has seriously been at least a year.

XL for me, I just hope they price them the same as iPhone 8/8+ or less