We have seen a veritable truckload of Huawei Mate 10 leaks and rumours. Finally though, we can now put an image or render to all the hardware and software leaks of the Mate 10 Pro thanks to Evan Blass (@evleaks).

Tonight Evan Blass has revealed the Mate 10 Pro via his Twitter account, and it’s a great looking phone.

The leak shows the Huawei Mate 10 Pro with it’s rear mounted fingerprint sensor (I was hoping for under-display but that seems not to be — rumour quashed). The dual rear Leica camera, as expected, is also present as well as minimal bezels at the top and bottom of the front of the device. 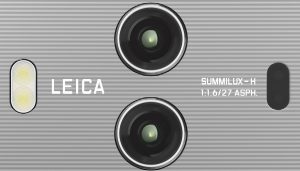 Huawei have stamped their name on the bottom bezel and on the rear of the device too. The display is indeed an 18:9 (ish) aspect ratio as expected. The second rumour quashed is the curved front display. This display, from the image, does not look curved at all. The display also shows a wallpaper with AI on it, once again signalling Huawei’s focus on the inbuilt dedicated neural processing unit in the Kirin 970.

The design of the phone is very un-Mate-like based on previous generations. Mate phones in the past have been very square and all business with the stylish designs left for the P series phones. Not any more. This looks sleek and elegant.

There it is, Huawei’s answer to the iPhone X, to the Note 8 and the Pixel XL 2. How do you feel they will fare against these other devices? Are you considering one? I know I am.

After my experience with Huawei and warranty, I won’t be touching this with a ten foot pole. Sure it looks great, but give it 6 months when you have your first problem and try getting it fixed.

The Mate 10 Pro is looking great but are we going to get it here in Australia?

informally, Yes. will be priced up against high end phones.

It looks ok to me , and the general layout looks good too .
But i will admit I’m still a bit partial to form factor of the mate 9 , i just prefer the phablet style 16.9 aspect and flat screen given the option .

by all accounts Huawei may have you covered there with the Mate 10, as opposed to the pro. We’ll find out in a couple of weeks but often rumours and leaks just end up disappointing us. hopefully not this time