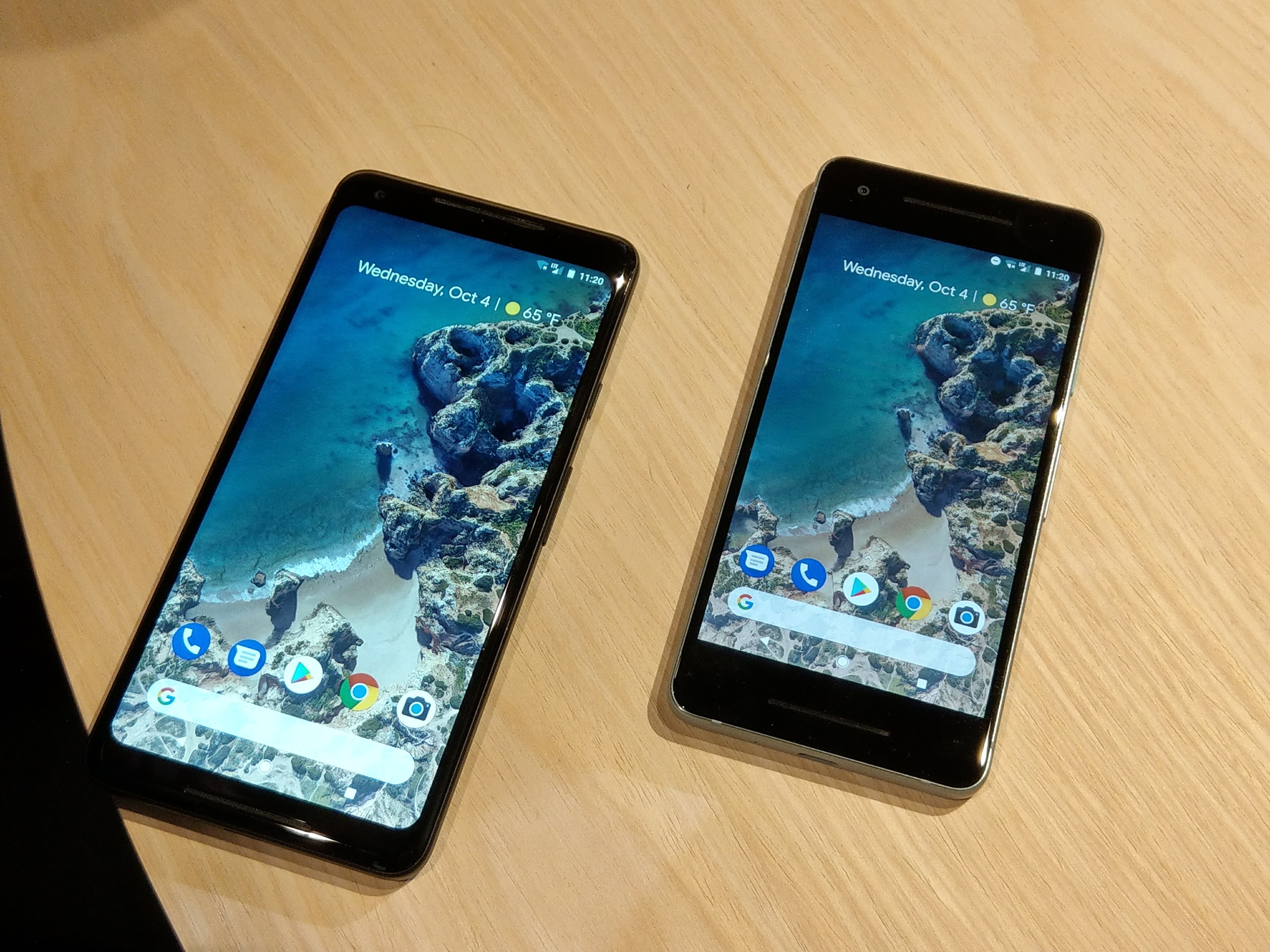 Google’s newest phones, the Pixel 2 and Pixel 2 XL, are finally here after months of leaks and speculation. The official launch event just wound up at San Fransiscio’s SF Jazz building, and we’ve had a chance – briefly – to go hands-on with the new phones in a very crowded demo area.

This year’s Pixels are markedly different visually, but they share the same software smarts. The updated industrial design of the range accentuates the curves on both devices, moreso on the XL where the screen corners are rounded to match the device’s curvature.

Both phones feel a little lighter than you’d expect given their construction. It’s not out of line with 2017’s major phones, though. Despite the 6-inch screen size of the Pixel 2 XL, it shares the taller and thinner screen aspect ratio of the LG V30, and thus is pretty comfortable to hold in the hand despite the size.

The colour highlights on the power button – a playful addition according to Google – do take a little getting used to but it’s very likely you’ll get used to it quickly. The light teal colour is a little easier on the eye than the sharp red.

Google’s demo staff were quick to point out the differences between the LG V30 and the Pixel 2 XL – there’s a different finish on the device (arguably, Google’s flatter colours are a nicer look than LG’s own shiny finish) and they’ve adorned the face of the phone with the front-facing speakers that have become so well-regarded by fans.

Also new is the addition of Active Edge, Google’s version of the squeezeable smartphone edges. On this year’s Pixels, it launches the Google Assistant – but it’s not yet clear if this is configurable:

It’s been easy in the run-up to today’s announcement to dismiss the standard 5.2-inch Pixel 2 as the poor cousin to the 6.0-inch but with the smaller phone in hand that comparison seems a little unfair. In the hand, the new Pixel 2 is quite comfortable and it feels consistent with what’s come before it – that familiarity is going to be important in winning over fans from the i-device side. We need to talk about the cameras. They’re pretty impressive.

DxOMark has given the Pixel 2’s camera its highest ever rating for a mobile device. 2017 has seen a leapfrog game, with top laurels passed from Google to HTC, to Apple, to Samsung and finally back to Google again. It puts the Pixel 2 in a remarkably good position to appeal to smartphone photographers.

While the Pixel 2 XL is based on LG’s V30 hardware, the single rear camera is Google’s choice. It’s an f/1.8 aperture which isn’t the lowest on the market at present, but it’s paired up with Google’s machine learning smarts to enhance the photography experience.

Google Camera’s new Portrait mode is specifically tied to a “left” and “right” view in each pixel, which makes it possible to determine depth in a photo and lets the device do some clever post-processing to determine depth. It works remarkably well, although we did see curly hair confuse it a little in the demo area. You can also access the blurred and the standard version of your shot:

We also got a look at how Google Lens will work, although the video below does come with a warning – the demonstrator was pretty excited about the possibilities, and does keep moving the phone around a lot.

I was all set to let the Pixel 2 devices pass on by this year (I purchased a Pixel of my very own last year), but the camera may well see me coming back to the Pixel fold.

All we need now is an Australian release date. Okay Google Australia – when can I damage my wallet?

The price of phones in Australia must somehow be index linked to annual Sydney house price rises increases, it really is the only explanation as to how we have arrived at $1500.00 phones.

No headphone jack, no wireless charging, IP67 splash proof instead of IP68 water proof. No thanks Google. Despite pure Android, regular updates and supposed benefits of Google Assistant, the value proposition is just not realistic. Especially compared to other phones right now.

At nearly $1,500 for a phone I am no longer buying Google. For half the price I got the Oneplus with close to specs including a headphone jack. the price is beyond a joke and not acceptable.

any of the brains here at Ausdroid know if there is a way to track price drops on phones on carrier plans in Australia ? e.g. the S8 on Telstra, the Note on any carrier, original Pixels on Telstra ?
10-15 bucks a month is quite a chunk over 2 years

What’s the difference between the two?

For an extra $100, would you be better to buy a note 8 instead? I’m not the biggest fan of TW or the fingerprint sensor placement but it has 6GB RAM, micro SD card slot, dual camera and wireless charging.

It really just depends on what you value more in your daily driver. Yes the Pixel is expensive, but it places more importance on software and a fluid UI. As great as the Note 8 is, using one out of the box, you can instantly see the Software bog down with even a few apps loaded in RAM. No matter how great their hardware gets, it always has to deal with piss poor software which just gets worse over time. Wireless charging is probably the only feature i’d truly miss on the Pixel.

So now we know it’s exclusive to the most expensive carrier in the universe, when does the V30 come out here?

I still want a headphone port so it’s LG V30 for me which will no doubt be cheaper in the real world & has expandable storage.

I think i’m in the same boat as you.
The Quad DAC on the V30 (or even the V30+) might sway me from the dual front facing speakers. I can’t see any other hardware reason to buy this Pixel.

Software wise, the security and software updates aren’t enough to justify the price.

I use a pillow speaker at minimum once daily and wired headphones once a week, aux on some car trips and really really don’t want to contribute to demand for 3.5mm free phones but if the XL has great battery along with the best camera that will suit my medical needs and help me get good shots of my family for capturing memories and might be a choice I need to make. the V30 looks fantastic except one thing, the photos look astounding on a ~5 inch phone screen or a low res tablet but do a print above 4… Read more »

Anyone know if they will be available on all carriers? or exclusive to Telstra again. I hope not.

Just telstra and outright at jb-hifi. It’s stated in ausdroids other article!