Home News and Editorial Reviews TRNDlabs True Wireless Nova Earbuds : Are these the wireless earbuds for... TRNDlabs is most definitely not a household name. They have been making cool, innovative products since just 2014 but are not known for their audio products, more for their drones — if you know them at all.

They have branched out into a burgeoning segment of the headphone market, the truly wireless earbuds. Many others have introduced their product to the market this year and TRNDlabs are one that hope their design and implementation puts them into everyone’s mind when purchasing these. Their price certainly does.

The TRNDlabs NOVA True Wireless Earbuds (known as NOVA earbuds from here on) come in a relatively plain box which is not a great start. Once the box is opened and the contents examined your mind is most certainly changed over the first impressions of the product.

In the box is the Nova earbuds, housed inside a NOVA power case and a small box which holds a small microUSB charging cable and the three spare sets of earbud cushions. 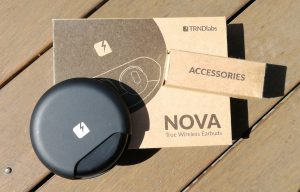 The earbuds are small and do not have any fancy wings to fins on them to help them to stay in the ear. They just have the body of the earbud and the ear canal tip. Each bud has a single button on it which can be used to play and pause music and to answer and make calls only. The button has the same function on each earbud.

As part of the package the power case charges the earbuds whenever they are not in use. The earbuds lasted for around two and a half hours at a time for me before needing to be recharged. They are automatically recharged when placed inside the storage case. The battery life of the case was amazing. TRNDlabs say you should get 60 hours of listening out of the earbuds and case before having to recharge it — and I believe it. I managed to get 20 hours of listening out of the earbuds (at full volume each time) and yet the case was still at 75% full (3 out of 4 lights).

I suspect if I continue using them I’ll hit the 60 hour mark with ease. The power case not only charges the ear buds but also has a USB A port to allow you to charge your phone/tablet etc, albeit at the slow rate of 1.5A.

The earbuds are not very big measuring just 15 x 15 x 25 mm and the case 80 x 80 x 25 mm. The case is a nice touch with the top of it turning one way to reveal the storage area for the earbuds and the other way for the charging ports and indicator lights. Each earbud weighs just 4 grams and the case 101 grams — neither excessive at all.

Included in the package are two different types of tips in two sizes each. One is a foam-style and one a more rubbery style. I prefered the suction-type fit of the rubbery style but everyone has different shaped ear canals etc so your perfect fit may well be different to mine.

When placed in the ear it was basically just jamming them in the ear hole and then the tight fit allowing them to stay in. Surprisingly they weren’t uncomfortable when using them on a daily basis. I certainly knew they were there but I was comfortable wearing them for over an hour. After two hours it did start to get a bit wearing but a small break of a minute or two and readjusting them worked fine.

I allowed some work colleagues to also test them before returning to me (after autoclaving them) and all of them were surprised by the comfort and the fit. They look bulky but fit well. While running as fast as I could and TRYING to bounce them out of my ear on the treadmill I was unsuccessful in doing so — I was even banging my head while doing it. In saying that if you are a very serious runner this may not be the pair for you are the comfort isn’t as good as some others but for the casual runner they are perfectly fine.

The Nova earbuds do not have noise cancelling but for the times I used them I did not need it. Having them in my ear and the sound at around 50 percent I was unable to hear a single noise from the person next to me who was speaking. I even had him speak loudly and yet I could hear nothing. The tight fit combined with firing the sound from so close to the ear drums most likely led to this. In saying this I was unable to test in a plane but at the gym or other places I tested them noise cancelling was not required.

The sound, by themselves was quite good. They did lack the base/lower end sound that the Bose SoundSport and some other high end wireless earbuds have but the sound is definitely perfectly adequate. I didn’t realise the difference in sound until I made a point of playing the Bose directly after the Nova earbuds.

The ability to get decent connectivity from such small earbuds amazes me. In saying that it was not perfect. It took a while to connect to the Bluetooth on my Pixel XL but then Google aren’t known for their high end Bluetooth stacks but I had no issues connecting to a Huawei P10 Plus.

The left earbud is the main earbud with the right being the slave. Turn the left on by long pressing the button followed by the right. The two then sync to each other followed by them connecting to a device. You do not have to use both earbuds at the same time. Just the left by itself works fine.

The Bluetooth connection to the phone itself was a tad sketchy with it skipping or jumping once every five minutes or so. I tried on multiple devices and had a similar issue each time. Repairing the device tended to make the skipping less frequent although the skipping wasn’t bad enough for me to stop using them. True wireless earbuds are all the rage at the moment and there is a reason why: headphone jacks are out and why would you prefer wireless when you can get a sound very close without wires.

The Nova earbuds are a decent pair of earbuds without any frills. They look plain but work well. They seal within the ear which creates it’s noise isolation and also the ability to stay in the ear even while performing vigorous exercise. The power case they come with is a stylish case that offers many more hours of use than other wireless earbuds — and it can charge your phone at the same time you use the earbuds if you wish.

The TRNDlabs True Wireless Nova Earbuds are a bargain at just $101. They are well under half the price of most of the others on the market and while may lack the polish and finishing of them still sound great and work well. They can be purchased from the TRNDlabs website with free shipping to Australia.

Would I recommend them? Yes, for a certain subset of people. If you want extremely high quality sound and don’t mind paying for it then these are not for you. These are for the person who wants a decent pair of true wireless earbuds that can be used while exercising without having to take out a second mortgage to afford them.