Home News and Editorial Huawei unveil the Mate 10 and Mate 10 Pro and they are... In Munich this evening Huawei have finally unveiled phones that many of us have been tracking for quite a while, the Mate 10 and Mate 10 Pro. Huawei have launched some new hardware and software with them and hope that this will lead to a disruption in the smartphone world — disruptive innovation they called it.

The Mate line has always been Huawei’s innovative line, paving the way for the rest of the Huawei lineup and this year is no different. This year Huawei are introducing their new 10nm Kirin 970 chipset with its built-in Neural Network Processing Unit with both phones along with EMUI 8.0 (yes it seems they skipped a few but this puts them in line with the Android version numbers). Huawei are focusing on AI and it’s integration into the smartphone turning into a device that knows what you want before you do.

The Leica rear camera setup in both phones is a combination of 12MP RGB and a 20MP monochrome sensors and feature OIS. Both phones include a new Leica Dual rear camera with an aperture of f/1.6 which also takes advantage of the AI hardware with real time scene and object recognition, an AI-powered Bokeh effect, AI-powered digital zoom with AI motion detection.

They also house a 4000 mAh battery that is charged using Huawei’s SuperCharge which is the world’s first fast charging technology to receive TÜV Fast-Charge Safety Certification — no exploding batteries here. The battery life is 30% more than the power sipping, long lasting Mate 9 and can charge at 4.5V/5A which can charge from one percent to 20 in ten minutes and from one to 58 in thirty minutes. The battery is one component set to take advantage of the AI built-in with its AI-powered smart battery management which allocated resources based on how you use the phone.

EMUI 8.0 is apparently slimmed down and simplified once again from it’s previous generation and is based on Android 8.0. It obviously features a new AI engine to take advantage of the Kirin 970 and it’s AI. Inside EMUI 8.0 is a desktop mode, without the requirement of a dock. Using just a USB-C cable plugged directly into a monitor you can then run both displays independently with the monitor showing a separate desktop interface (PC Mode). You can use a Bluetooth keyboard or mouse or just use the virtual keyboard and touchpad built into the Mate 10. 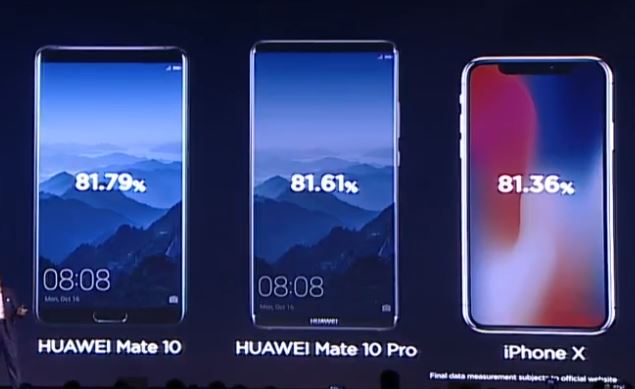 The good news is that both of these will be making their way Downunder. The Mate 10 will arrive in a black colour with 64GB of onboard storage and 4GB of RAM and have a SRP of $899. It will be available via Vodafone and Open Channels (which will most likely be Harvey Norman and JB Hi-Fi based on where the Nova 2i is being sold) from November 15, 2017.

Now that you have seen it released, is this your next? Or are you waiting for our reviews? Stay tuned for those as we check the mail every minute of the day for our review units. For more information on either of these phones head over to Huawei’s website and check them out.

Ive been waiting for the Huawei Mate 10 (not the Pro as I hate the look of long & skinny phones – eg Samsung & Google) & Ive heard that Vodophone is selling from the 16/11 but its a black phone which I do not like (would prefer a gold if possible) – have you heard any other places like JB HI FI or Harvey Norman selling (& when) or would you know a Australian or overseas site that I could get it cheaper ? also, Ive heard all places will include a camera – comments ?

The phone prices for this brand are outrageous it’s not a name brand in asutrlia so why they want to charge same as Apple and Samsung its silly for this sort of money I can get Apple phone or Samsung both very good name brands .Huawei have lost the plot .

JB-HiFi margins on some phone is criminal and it’s extortion. I.e Note 5 is $899.

As for the mate 10 – Where would be the best place to purchase a phone at a competitive price? Anyone list any websites or online stores?

Any news on Huawei’s commitments to future software updates for their latest phones? Both monthly security patches and major updates?

security patches via quarterly updates unless more serious. At least one Android version update is what we’ve been told officially.

You need to add a “for handsets purchased outright from retailers only” disclaimer to that. Huawei has a seriously bad track record on delivering both security patches and software updates with Telco supplied P9’s only just getting security updates after 13 months and still being stuck on Android 6 despite promises of Android 7 being delivered by end of Q1 2017.

Before you all slam Huawei and Optus just know you can always get the phone from Optus on a plan and then cancel that plan right away without cancellation fees just pay out your phone which sometimes is actually a few dollars cheaper than other places. It’s basically like the new Vodafone deal.
The phones aren’t locked to Optus either.

Thanks for that.. Might look into it… At “just” 1099 it’s a definite alternative to the pixel XL 2

May not be locked but will have Optus carrier firmware on it. So technically not an unbranded phone.

Never said it was unbranded!

Fair enough but take note of my point re firmware.

I honestly wouldn’t know anyone that would be willing to go through all that to get the Pro and to top it off it’ll most likely be running carrier firmware slowing down updates etc.. It’s a lost opportunity for Huawei to not offer it outright and unbranded also. Most people would just say bad luck Huawei, and get something else, it’s not like we’re short of competition. I hate to say it but pricing actually does seem pretty fair [even though I think all flagships are way overpriced] considering what the competition is doing with their RRP on their flagships… Read more »

Only an idiot or a desperate fan would pay a carrier full price for a carrier gimped handset. You could wait two weeks and buy a non-gimped one from overseas for the same price or less and it would likely have more RAM/Storage, better colours and dual SIM. So far there have been no apparent hardware or quality problems with Huawei handsets so overseas warranty should not be that much of an issue, it is Huawei AU’s abysmal efforts at updating Telco supplied handsets that is the problem. 13 months for crucial security updates on the P9 and zero Android… Read more »

I intended to consider the Pro v the Pixel XL2 but if I can only get Australian stock on a contract via Optus, I’ve lost all interest. Bye bye, Huawei

Yeah not interested in the carrier versions, they won’t have dual sim! I’ll be buying my mate 10 pro online

Epic fail. A missed opportunity by Huwaei. You would expect the Pro to have all the features of the regular Mate 10 and then some but it only gets a HD display instead of QHD, no mirco sd card slot and missed out on headphone jack and all costing $200 more for basically double the storage (64GB vs 128GB) and more ram (4GB vs 6GB). Also anti-competitive behaviour by only selling the Pro via Optus. Seems Huwaei’s quest to become number one phone maker is going to be hamstrung by this completely stupid agreement. Not everyone wants to join Optus… Read more »

Well said mate. I’m still rocking an LG G6 after selling my Pixel 5 inch and I’ve been disappointed with the flagship phones released this year so far. I’ll have a look at a Pixel 2 XL but I may even wait until next year and see what comes out then.

Yeah not too thrilled with the optus only for the pro, being a Vodafone customer & all, but the pro looks promising

Someone mentioned signing to optus and then cancelling and paying out phone… Not sure how much that costs but will look into it. I assume it’d cost a single month of access?

The phone will still have Optus carrier firmware on it. Could play havoc with other Telco sims

It isn’t the SIM that will be the biggest problem, it is Huawei AU’s atrocious security and software update history for carrier gimped handsets that will cause the most pain. 13 month wait for security updates on the P9.

Damn Huawei have great prices in Aus, shame about Optus getting the pro as exclusive as their reception is poor in my area.

The front button and lack of 18:9 on the standard mate makes my decision for my next phone harder than it needed to be.