Home News and Editorial Telstra to issue refunds for those dissatisfied with the AFL app on...

Australia’s major sports leagues are woefully behind their overseas counterparts when it comes to their digital offerings. As part of the media deal the AFL made with various parties, Telstra was only able to offer their streaming service on devices with displays smaller than 7 inches but now those who feel slighted by Telstra can claim a refund.

Who decided this arbitrary number is unclear but it seems to be a very strange decision considering the sheer number of iPads and 10 inch Android tablets in the wild. When Telstra were advertising their streaming service they advertised it on a tablet that looked bigger than 7 inches. As such many people were extremely annoyed when the first footy match rolled around and they had black borders all the way around the display, with the stream displayed at a maximum of 7 inches.

At the time I noted how annoyed customers were and it seems that someone pointed the ACCC in the direction of Telstra and the AFL. Unfortunately the AFL’s greedy nature ended up with them splitting the rights to their games but the whole issue was Telstra’s fault for showing their streaming service operating on a big tablet. 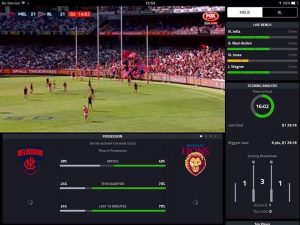 The ACC pointed out that the AFL Live Pass was advertised on the AFL website operating on tablets, full screen along with the accompanying text — “Watch every AFL match live…on mobile and tablet”. ACC Chairman Rod Sims said that:

The ACCC was concerned that footy fans may have subscribed or renewed subscriptions to the AFL Live Pass thinking that they could continue watching live AFL matches in full-screen on a tablet, when this was not the case.
Some footy fans were locked into a Telstra subscription before the screen size restriction took effect. When businesses make changes to the subscription terms of goods or services, customers should be clearly notified of the change so people are able to make an informed decision about whether to continue their subscription.

After prompting by the ACCC Telstra are now offering refunds to users who were subscribed to the AFL Live Pass at the end of January 2017, and who had downloaded the app on a tablet. To apply for a refund you need to fill out the application for refund for on Telstra’s Crowd Support site. The form will only be inline until the 22nd of March 2018 but refunds can be processed after that date just by contacting Telstra.

The refund is NOT available to users who received a free subscription as part of a Telstra contract/sim.

Whether the AFL change this next year is unknown but unlikely however something needs to change. The Telstra AFL app is very limiting and average at best. It is not just Telstra’s fault. The AFL have placed these ridiculous restrictions on them, obviously not understanding the whole digital media landscape (and looking to capitalise on their product by offering multiple rights to multiple organisations). Telstra and the AFL should look to overseas leagues on how to do digital media. The NFL Game Pass subscription allows the user to play it on any sized device that isn’t a TV, on a PC, on a Chromebook (straight through the website) and every offering includes Chromecast. They are missing out on a massive market — the burgeoning mobile streaming market — by having such a restrictive and poor quality app.

Were you one of those affected by this false advertising by Telstra? Have you already applied for a refund?

Bad for developers but it is good they accepted their mistake and initiating the refunds.

I had a subscription the year before and glad I didn’t renew this year. I would definitely have been screaming for a refund!