Pixel Pixel Pixel. No I’m not calling my cat but repeating what seems to be the content of every headline in the last few days. Amongst all the controversy surrounding the 2017 Pixel 2 XL comes a leak suggesting the codenames for next year’s iteration.

The folks at Droid Life have this year proven that they have some reliable contacts within Google so when today they say that that may have the codenames for next year’s Pixel phones we sit up and pay attention.

They have heard that at this stage Google are working on devices with three different codenames — remember there was originally three devices (walleye, muskie and taimen) in the works for this year. The three codenames are “crosshatch”, “albacore” and “blueline”. Their source revealed that Google may end up referring to the phones as A, B and C to protect their identity. All three of the devices will apparently be high end with two of them considered premium devices.

Droid Life have had this information for a while, waiting for additional confirmation and today they found that with one of the names (crosshatch) appearing in the AOSP. The page where it appears also discusses last year’s Pixel phones (marlin and sailfish). Each piece of information by itself is not definitive proof but combined they make for a compelling case. 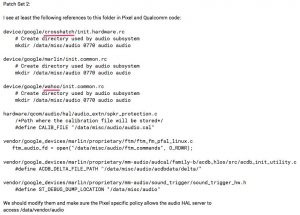 Of note is the appearance of an unknown device called “wahoo” but they have been told that it may have been part of the 2017 devices and not part of the 2018 device list. Wahoo has also been mentioned in the Android repository today but the repository is empty — possibly something to keep an eye on in the coming months.

Come on now. That’s not really true. Let’s just wait a little longer. But yes, looking forward to the Pixel 3. Almost certainly my next device.

I think I’ll be happy with the current 5″ full HD display next year, but only if it’s on an iPhone 8 sized body. Headphone jack, better stereo speakers (more bass please?), IP68 and top notch cameras (both front and back) as always. Better video recording (HDR+ on video, I’ll be fine if it’s only on 1080p60), 4K60, better audio quality in video recording. Should be pretty feasible, right?

You’re not going to get a headphone jack. Let that one go from the start to save yourself grief down the line.

Keep the smaller device, give us back our headphone jack and get some quality control on the screens. That’s all I ask.

Given the latest issues surrounding hissing and popping, the quality control needs to be extended to the whole device.

They just need to work on quality control and keeping up with hardware innovations.